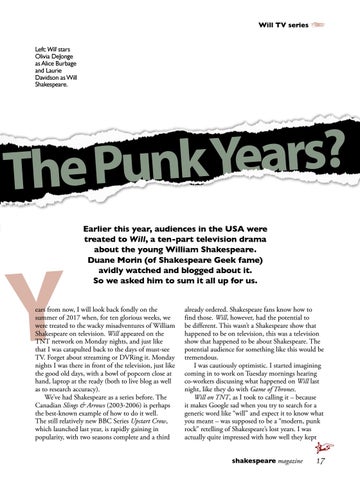 Left: Will stars Olivia DeJonge as Alice Burbage and Laurie Davidson as Will Shakespeare.

Earlier this year, audiences in the USA were treated to Will, a ten-part television drama about the young William Shakespeare. Duane Morin (of Shakespeare Geek fame) avidly watched and blogged about it. So we asked him to sum it all up for us.

ears from now, I will look back fondly on the summer of 2017 when, for ten glorious weeks, we were treated to the wacky misadventures of William Shakespeare on television. Will appeared on the TNT network on Monday nights, and just like that I was catapulted back to the days of must-see TV. Forget about streaming or DVRing it. Monday nights I was there in front of the television, just like the good old days, with a bowl of popcorn close at hand, laptop at the ready (both to live blog as well as to research accuracy). We’ve had Shakespeare as a series before. The Canadian Slings &amp; Arrows (2003-2006) is perhaps the best-known example of how to do it well. The still relatively new BBC Series Upstart Crow, which launched last year, is rapidly gaining in popularity, with two seasons complete and a third

already ordered. Shakespeare fans know how to find those. Will, however, had the potential to be different. This wasn’t a Shakespeare show that happened to be on television, this was a television show that happened to be about Shakespeare. The potential audience for something like this would be tremendous. I was cautiously optimistic. I started imagining coming in to work on Tuesday mornings hearing co-workers discussing what happened on Will last night, like they do with Game of Thrones. Will on TNT, as I took to calling it – because it makes Google sad when you try to search for a generic word like “will” and expect it to know what you meant – was supposed to be a “modern, punk rock” retelling of Shakespeare’s lost years. I was actually quite impressed with how well they kept shakespeare magazine