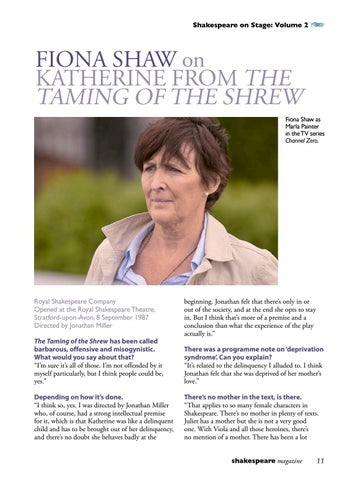 FIONA SHAW on KATHERINE FROM THE TAMING OF THE SHREW Fiona Shaw as Marla Painter in the TV series Channel Zero.

Royal Shakespeare Company Opened at the Royal Shakespeare Theatre, Stratford-upon-Avon, 8 September 1987 Directed by Jonathan Miller The Taming of the Shrew has been called barbarous, offensive and misogynistic. What would you say about that? “I’m sure it’s all of those. I’m not offended by it myself particularly, but I think people could be, yes.” Depending on how it’s done. “I think so, yes. I was directed by Jonathan Miller who, of course, had a strong intellectual premise for it, which is that Katherine was like a delinquent child and has to be brought out of her delinquency, and there’s no doubt she behaves badly at the

beginning. Jonathan felt that there’s only in or out of the society, and at the end she opts to stay in. But I think that’s more of a premise and a conclusion than what the experience of the play actually is.” There was a programme note on ‘deprivation syndrome’. Can you explain? “It’s related to the delinquency I alluded to. I think Jonathan felt that she was deprived of her mother’s love.” There’s no mother in the text, is there. “That applies to so many female characters in Shakespeare. There’s no mother in plenty of texts. Juliet has a mother but she is not a very good one. With Viola and all those heroines, there’s no mention of a mother. There has been a lot shakespeare magazine