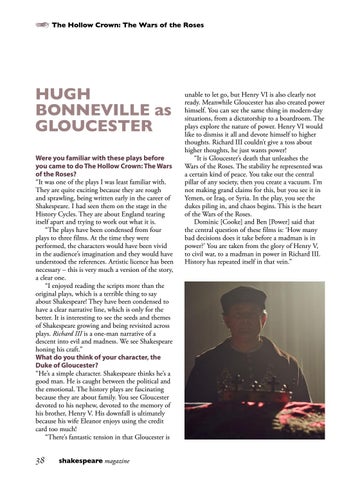  The Hollow Crown: The Wars of the Roses

HUGH BONNEVILLE as GLOUCESTER Were you familiar with these plays before you came to do The Hollow Crown: The Wars of the Roses? “It was one of the plays I was least familiar with. They are quite exciting because they are rough and sprawling, being written early in the career of Shakespeare. I had seen them on the stage in the History Cycles. They are about England tearing itself apart and trying to work out what it is. “The plays have been condensed from four plays to three films. At the time they were performed, the characters would have been vivid in the audience’s imagination and they would have understood the references. Artistic licence has been necessary – this is very much a version of the story, a clear one. “I enjoyed reading the scripts more than the original plays, which is a terrible thing to say about Shakespeare! They have been condensed to have a clear narrative line, which is only for the better. It is interesting to see the seeds and themes of Shakespeare growing and being revisited across plays. Richard III is a one-man narrative of a descent into evil and madness. We see Shakespeare honing his craft.” What do you think of your character, the Duke of Gloucester? “He’s a simple character. Shakespeare thinks he’s a good man. He is caught between the political and the emotional. The history plays are fascinating because they are about family. You see Gloucester devoted to his nephew, devoted to the memory of his brother, Henry V. His downfall is ultimately because his wife Eleanor enjoys using the credit card too much! “There’s fantastic tension in that Gloucester is

unable to let go, but Henry VI is also clearly not ready. Meanwhile Gloucester has also created power himself. You can see the same thing in modern-day situations, from a dictatorship to a boardroom. The plays explore the nature of power. Henry VI would like to dismiss it all and devote himself to higher thoughts. Richard III couldn’t give a toss about higher thoughts, he just wants power! “It is Gloucester’s death that unleashes the Wars of the Roses. The stability he represented was a certain kind of peace. You take out the central pillar of any society, then you create a vacuum. I’m not making grand claims for this, but you see it in Yemen, or Iraq, or Syria. In the play, you see the dukes piling in, and chaos begins. This is the heart of the Wars of the Roses. Dominic [Cooke] and Ben [Power] said that the central question of these films is: ‘How many bad decisions does it take before a madman is in power?’ You are taken from the glory of Henry V, to civil war, to a madman in power in Richard III. History has repeated itself in that vein.”