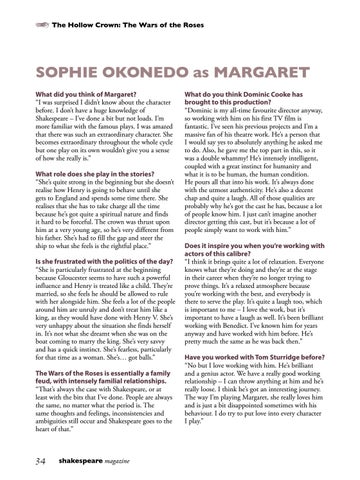  The Hollow Crown: The Wars of the Roses

SOPHIE OKONEDO as MARGARET What did you think of Margaret? “I was surprised I didn’t know about the character before. I don’t have a huge knowledge of Shakespeare – I’ve done a bit but not loads. I’m more familiar with the famous plays. I was amazed that there was such an extraordinary character. She becomes extraordinary throughout the whole cycle but one play on its own wouldn’t give you a sense of how she really is.” What role does she play in the stories? “She’s quite strong in the beginning but she doesn’t realise how Henry is going to behave until she gets to England and spends some time there. She realises that she has to take charge all the time because he’s got quite a spiritual nature and finds it hard to be forceful. The crown was thrust upon him at a very young age, so he’s very different from his father. She’s had to fill the gap and steer the ship to what she feels is the rightful place.” Is she frustrated with the politics of the day? “She is particularly frustrated at the beginning because Gloucester seems to have such a powerful influence and Henry is treated like a child. They’re married, so she feels he should be allowed to rule with her alongside him. She feels a lot of the people around him are unruly and don’t treat him like a king, as they would have done with Henry V. She’s very unhappy about the situation she finds herself in. It’s not what she dreamt when she was on the boat coming to marry the king. She’s very savvy and has a quick instinct. She’s fearless, particularly for that time as a woman. She’s… got balls.” The Wars of the Roses is essentially a family feud, with intensely familial relationships. “That’s always the case with Shakespeare, or at least with the bits that I’ve done. People are always the same, no matter what the period is. The same thoughts and feelings, inconsistencies and ambiguities still occur and Shakespeare goes to the heart of that.”

What do you think Dominic Cooke has brought to this production? “Dominic is my all-time favourite director anyway, so working with him on his first TV film is fantastic. I’ve seen his previous projects and I’m a massive fan of his theatre work. He’s a person that I would say yes to absolutely anything he asked me to do. Also, he gave me the top part in this, so it was a double whammy! He’s intensely intelligent, coupled with a great instinct for humanity and what it is to be human, the human condition. He pours all that into his work. It’s always done with the utmost authenticity. He’s also a decent chap and quite a laugh. All of those qualities are probably why he’s got the cast he has, because a lot of people know him. I just can’t imagine another director getting this cast, but it’s because a lot of people simply want to work with him.” Does it inspire you when you’re working with actors of this calibre? “I think it brings quite a lot of relaxation. Everyone knows what they’re doing and they’re at the stage in their career when they’re no longer trying to prove things. It’s a relaxed atmosphere because you’re working with the best, and everybody is there to serve the play. It’s quite a laugh too, which is important to me – I love the work, but it’s important to have a laugh as well. It’s been brilliant working with Benedict. I’ve known him for years anyway and have worked with him before. He’s pretty much the same as he was back then.” Have you worked with Tom Sturridge before? “No but I love working with him. He’s brilliant and a genius actor. We have a really good working relationship – I can throw anything at him and he’s really loose. I think he’s got an interesting journey. The way I’m playing Margaret, she really loves him and is just a bit disappointed sometimes with his behaviour. I do try to put love into every character I play.”