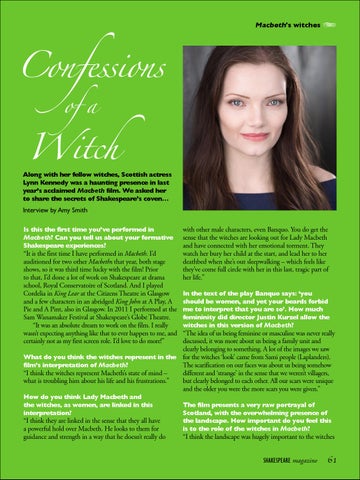 Along with her fellow witches, Scottish actress Lynn Kennedy was a haunting presence in last year’s acclaimed Macbeth½PQ;IEWOIHLIV to share the secrets of Shakespeare’s coven…

Interview by Amy Smith Is this the first time you’ve performed in Macbeth? Can you tell us about your formative Shakespeare experiences?

“It is the first time I have performed in Macbeth. I’d auditioned for two other Macbeths that year, both stage shows, so it was third time lucky with the film! Prior to that, I’d done a lot of work on Shakespeare at drama school, Royal Conservatoire of Scotland. And I played Cordelia in King Lear at the Citizens Theatre in Glasgow and a few characters in an abridged King John at A Play, A Pie and A Pint, also in Glasgow. In 2011 I performed at the Sam Wanamaker Festival at Shakespeare’s Globe Theatre. “It was an absolute dream to work on the film. I really wasn’t expecting anything like that to ever happen to me, and certainly not as my first screen role. I’d love to do more!”

with other male characters, even Banquo. You do get the sense that the witches are looking out for Lady Macbeth and have connected with her emotional torment. They watch her bury her child at the start, and lead her to her deathbed when she’s out sleepwalking – which feels like they’ve come full circle with her in this last, tragic part of her life.” In the text of the play Banquo says: ‘you should be women, and yet your beards forbid me to interpret that you are so’. How much femininity did director Justin Kurzel allow the witches in this version of Macbeth?

“The idea of us being feminine or masculine was never really discussed, it was more about us being a family unit and clearly belonging to something. A lot of the images we saw What do you think the witches represent in the for the witches ‘look’ came from Sami people (Laplanders). film’s interpretation of Macbeth? The scarification on our faces was about us being somehow “I think the witches represent Macbeth’s state of mind – different and ‘strange’ in the sense that we weren’t villagers, what is troubling him about his life and his frustrations.” but clearly belonged to each other. All our scars were unique and the older you were the more scars you were given.” How do you think Lady Macbeth and the witches, as women, are linked in this interpretation?

“I think they are linked in the sense that they all have a powerful hold over Macbeth. He looks to them for guidance and strength in a way that he doesn’t really do

The film presents a very raw portrayal of Scotland, with the overwhelming presence of the landscape. How important do you feel this is to the role of the witches in Macbeth?