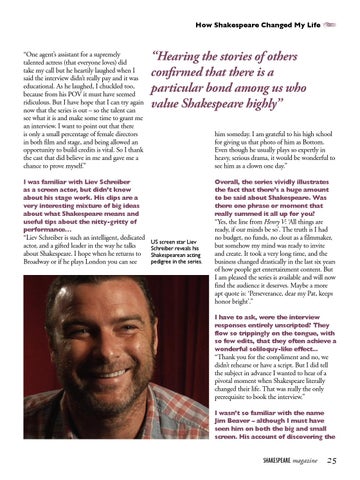 How Shakespeare Changed My Life

“One agent’s assistant for a supremely talented actress (that everyone loves) did take my call but he heartily laughed when I said the interview didn’t really pay and it was educational. As he laughed, I chuckled too, because from his POV it must have seemed ridiculous. But I have hope that I can try again now that the series is out – so the talent can see what it is and make some time to grant me an interview. I want to point out that there is only a small percentage of female directors in both film and stage, and being allowed an opportunity to build credits is vital. So I thank the cast that did believe in me and gave me a chance to prove myself.”

“Hearing the stories of others confirmed that there is a particular bond among us who value Shakespeare highly” him someday. I am grateful to his high school for giving us that photo of him as Bottom. Even though he usually plays so expertly in heavy, serious drama, it would be wonderful to see him as a clown one day.”

I was familiar with Liev Schreiber as a screen actor, but didn’t know about his stage work. His clips are a very interesting mixture of big ideas about what Shakespeare means and useful tips about the nitty-gritty of performance…

“Liev Schreiber is such an intelligent, dedicated actor, and a gifted leader in the way he talks about Shakespeare. I hope when he returns to Broadway or if he plays London you can see

Overall, the series vividly illustrates the fact that there’s a huge amount to be said about Shakespeare. Was there one phrase or moment that really summed it all up for you?

US screen star Liev Schreiber reveals his Shakespearean acting pedigree in the series.

“Yes, the line from Henry V: ‘All things are ready, if our minds be so’. The truth is I had no budget, no funds, no clout as a filmmaker, but somehow my mind was ready to invite and create. It took a very long time, and the business changed drastically in the last six years of how people get entertainment content. But I am pleased the series is available and will now find the audience it deserves. Maybe a more apt quote is: ‘Perseverance, dear my Pat, keeps honor bright’.” I have to ask, were the interview responses entirely unscripted? They flow so trippingly on the tongue, with so few edits, that they often achieve a wonderful soliloquy-like effect...

“Thank you for the compliment and no, we didn’t rehearse or have a script. But I did tell the subject in advance I wanted to hear of a pivotal moment when Shakespeare literally changed their life. That was really the only prerequisite to book the interview.”

I wasn’t so familiar with the name Jim Beaver – although I must have seen him on both the big and small screen. His account of discovering the