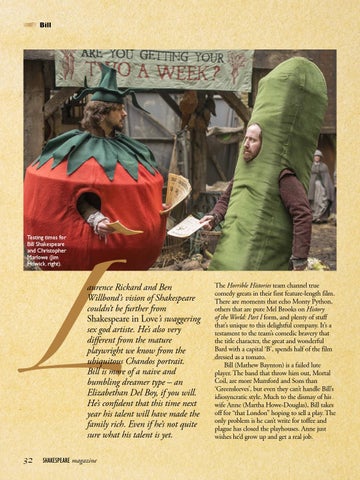 aurence Rickard and Ben Willbond’s vision of Shakespeare couldn’t be further from Shakespeare in Love’s swaggering sex god artiste. He’s also very different from the mature playwright we know from the ubiquitous Chandos portrait. Bill is more of a naive and bumbling dreamer type – an Elizabethan Del Boy, if you will. He’s confident that this time next year his talent will have made the family rich. Even if he’s not quite sure what his talent is yet.

The Horrible Histories team channel true comedy greats in their first feature-length film. There are moments that echo Monty Python, others that are pure Mel Brooks on History of the World: Part I form, and plenty of stuff that’s unique to this delightful company. It’s a testament to the team’s comedic bravery that the title character, the great and wonderful Bard with a capital ‘B’, spends half of the film dressed as a tomato. Bill (Mathew Baynton) is a failed lute player. The band that throw him out, Mortal Coil, are more Mumford and Sons than ‘Greensleeves’, but even they can’t handle Bill’s idiosyncratic style. Much to the dismay of his wife Anne (Martha Howe-Douglas), Bill takes off for “that London” hoping to sell a play. The only problem is he can’t write for toffee and plague has closed the playhouses. Anne just wishes he’d grow up and get a real job.