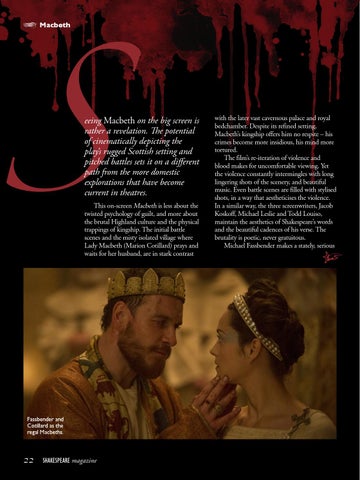 eeing Macbeth on the big screen is rather a revelation. The potential of cinematically depicting the play’s rugged Scottish setting and pitched battles sets it on a different path from the more domestic explorations that have become current in theatres. This on-screen Macbeth is less about the twisted psychology of guilt, and more about the brutal Highland culture and the physical trappings of kingship. The initial battle scenes and the misty isolated village where Lady Macbeth (Marion Cotillard) prays and waits for her husband, are in stark contrast

Fassbender and Cotillard as the regal Macbeths.

with the later vast cavernous palace and royal bedchamber. Despite its refined setting, Macbeth’s kingship offers him no respite – his crimes become more insidious, his mind more tortured. The film’s re-iteration of violence and blood makes for uncomfortable viewing. Yet the violence constantly intermingles with long lingering shots of the scenery, and beautiful music. Even battle scenes are filled with stylised shots, in a way that aestheticises the violence. In a similar way, the three screenwriters, Jacob Koskoff, Michael Leslie and Todd Louiso, maintain the aesthetics of Shakespeare’s words and the beautiful cadences of his verse. The brutality is poetic, never gratuitous. Michael Fassbender makes a stately, serious