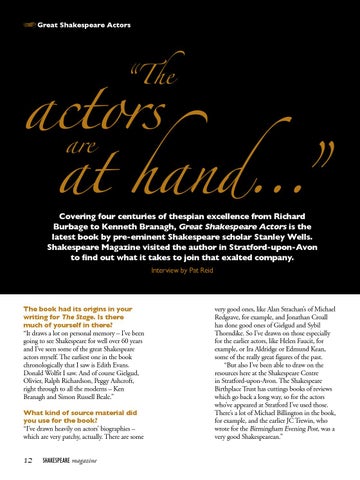 actors are at hand…” “The

The book had its origins in your writing for The Stage. Is there much of yourself in there? “It draws a lot on personal memory – I’ve been going to see Shakespeare for well over 60 years and I’ve seen some of the great Shakespeare actors myself. The earliest one in the book chronologically that I saw is Edith Evans. Donald Wolfit I saw. And of course Gielgud, Olivier, Ralph Richardson, Peggy Ashcroft, right through to all the moderns – Ken Branagh and Simon Russell Beale.” What kind of source material did you use for the book? “I’ve drawn heavily on actors’ biographies – which are very patchy, actually. There are some

very good ones, like Alan Strachan’s of Michael Redgrave, for example, and Jonathan Croall has done good ones of Gielgud and Sybil Thorndike. So I’ve drawn on those especially for the earlier actors, like Helen Faucit, for example, or Ira Aldridge or Edmund Kean, some of the really great figures of the past. “But also I’ve been able to draw on the resources here at the Shakespeare Centre in Stratford-upon-Avon. The Shakespeare Birthplace Trust has cuttings books of reviews which go back a long way, so for the actors who’ve appeared at Stratford I’ve used those. There’s a lot of Michael Billington in the book, for example, and the earlier JC Trewin, who wrote for the Birmingham Evening Post, was a very good Shakespearean.”