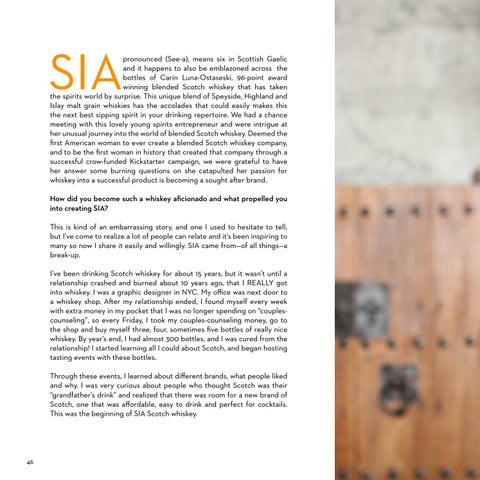 pronounced (See-a), means six in Scottish Gaelic and it happens to also be emblazoned across the bottles of Carin Luna-Ostaseski, 96-point award winning blended Scotch whiskey that has taken the spirits world by surprise. This unique blend of Speyside, Highland and Islay malt grain whiskies has the accolades that could easily makes this the next best sipping spirit in your drinking repertoire. We had a chance meeting with this lovely young spirits entrepreneur and were intrigue at her unusual journey into the world of blended Scotch whiskey. Deemed the first American woman to ever create a blended Scotch whiskey company, and to be the first woman in history that created that company through a successful crow-funded Kickstarter campaign, we were grateful to have her answer some burning questions on she catapulted her passion for whiskey into a successful product is becoming a sought after brand. How did you become such a whiskey aficionado and what propelled you into creating SIA? This is kind of an embarrassing story, and one I used to hesitate to tell, but I’ve come to realize a lot of people can relate and it’s been inspiring to many so now I share it easily and willingly. SIA came from—of all things—a break-up. I’ve been drinking Scotch whiskey for about 15 years, but it wasn’t until a relationship crashed and burned about 10 years ago, that I REALLY got into whiskey. I was a graphic designer in NYC. My office was next door to a whiskey shop. After my relationship ended, I found myself every week with extra money in my pocket that I was no longer spending on “couplescounseling”, so every Friday, I took my couples-counseling money, go to the shop and buy myself three, four, sometimes five bottles of really nice whiskey. By year’s end, I had almost 300 bottles, and I was cured from the relationship! I started learning all I could about Scotch, and began hosting tasting events with these bottles. Through these events, I learned about different brands, what people liked and why. I was very curious about people who thought Scotch was their “grandfather’s drink” and realized that there was room for a new brand of Scotch, one that was affordable, easy to drink and perfect for cocktails. This was the beginning of SIA Scotch whiskey. To stir curiosity around a booming industry and the personalities that make it shake.

To stir curiosity around a booming industry and the personalities that make it shake.