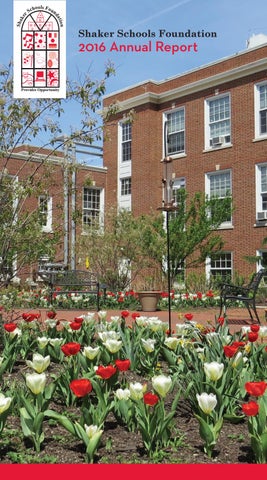 From the President My first year as President of the Shaker Schools Foundation coincided with a significant moment in our history. For the first time since 2000, we were faced with the retirement of our Executive Director and the opportunity to review and refine that role. We looked to each other, the District, and consultants from Business Volunteers Unlimited to help guide our thinking and create a vision for our future. I am extremely grateful to my colleagues on the Board of Trustees for the care and intelligence with which they handled what could have been a very disruptive time. Shaker’s Foundation is fortunate to have the benefit of their leadership and generosity. We took this crossroads seriously, because we know that the larger community – our thousands of donors, and the faculty, staff, and students of the Shaker Heights City Schools – depends upon us to provide major support to our amazing public school system. At the conclusion of the 2016 fiscal year, we celebrated the accomplishments and extraordinary sixteen-year tenure of Executive Director Christine Auginas. We ended the year with assets that exceeded

$3 million, and our independent audit was clean. The Annual Fund broke all previous records to raise more than $151,000, and we contained our operating expenses to end with a surplus for the seventh consecutive year. From July 1, 2015 through June 30, 2016, we continued to focus on four broad goals to increase: our permanent unrestricted endowment, the number of alumni donors, our visibility in the community, and the number of donors in Northeast Ohio. Elsewhere in this Annual Report you will read the details of our progress and success. Thank you for your support! The entire Board of the Shaker Schools Foundation is indebted to the alumni, parents, faculty, friends, and organizations that recognize the importance of giving generously so that teaching and learning will thrive in Shaker Heights, Ohio. My family’s stake is personal – our sons are Shaker students, and this District continues to exceed our expectations. It has been an honor to serve as President of the very first foundation in the State of Ohio to support a public school system.

Year in Review During fiscal year 2016, the Foundation continued its involvement in activities that support its mission to provide resources to enrich the educational experience of students of the Shaker Heights City School District. We upheld our Strategic Plan by continuing to connect with alumni, attract permanent unrestricted endowment, increase the Foundation’s visibility in the community, and encourage Northeast Ohioans to donate.

Photos Left: New sign in the Learning Garden; Shaker students in Japan; some of the new instruments purchased by the Foundation; Shaker’s First Class students Photo Below: The marching band’s final concert before leaving for Spain

• Among the alumni groups that made gifts to the Foundation are the Classes of 1955, 1965, 1985, and 2014. Initiated and supported by the Class of 1950/January 1951, the Summer Academy continues to be implemented. In 2015, 15 incoming freshman attended a sixweek academy, and three other sessions were held for students who began in 2012, 2013, and 2014. Summer Academy is an intervention program that helps students plan for success at the High School. Because of its success, the District will continue the program, with modifications based on the experiences of the first four years. • The Foundation helped organize an inaugural golf outing for the Baseball Fund in summer 2015. With proceeds from the event, a Nitroswing was purchased to help players improve their swings. • The owners of Master Marr’s Taekwon-do designated the Foundation as the beneficiary of their fall 2015 fundraiser, Give a Kid a Leg Up. The raised $2,560 to help ensure that Shaker’s disadvantaged students have access to enrichment opportunities. • The Learning Garden was named for Audrey Stout, through gifts in her memory and a generous grant from the Arminius Foundation. Mrs. Stout was a social studies teacher at the High School from 1968 to 1986, the mother of three Shaker graduates, and an outstanding gardener. In June 2016, the garden was featured in the Shaker Historical Society’s Gracious Gardens of Shaker Heights tour. • Donors to the Foundation enjoyed an appreciation event during the Art Department’s exhibit at Shaker Heights Public Library. They heard from several of the young artists, as well as Karen DeMauro, art department chair. • The Foundation made a $25,000 gift to the District toward the purchase of 27 concert and marching band instruments, and the Red & White added $10,000 to that total. Over the lifespan of these instruments, approximately 650 to 750 students will be impacted. • The Foundation helped underwrite travel costs for seven students to participate in international travel. They went to Spain with the marching band, to Japan, and to a leadership conference in England. • The Foundation was very active in fundraising for Shaker’s First Class, the new preschool launched by the District in August 2016. We raised a total of $150,500 from the following donors: Arminius Foundation, Cleveland Foundation, Heights Family Foundation, Huntington Bank, and the Martha Holden Jennings Foundation. The Shaker Schools Foundation made a contribution of $35,000 to this effort.

â&#x20AC;&#x201A;Contributors for the fiscal year July 1, 2015 to June 30, 2016 The Shaker Schools Foundation is grateful to the donors listed on the following pages for their generous support of the Shaker Heights City Schools through gifts to the 2016 Annual Fund, 2016 A Night for the Red & White, Legacy Fund, and Auditorium Campaign, as well as special gifts, memorial gifts, and tribute gifts.

Photo Top: The Cavani String Quartet provided a master class on Beethoven for the chamber orchestra, thanks to support from the Block Fund Photo Below: World drumming at Fernway

The Foundation also is grateful to donors who contributed gifts up to $35 in support of the Shaker Heights City Schools. 11

Enrichment Grants Annual proceeds from many of the Shaker Schools Foundation’s endowed funds support teacher grants that enrich the education of Shaker’s students. During the 2016 fiscal year, the Foundation distributed 26 enrichment grants to 38 teachers. Sample grants in elementary, middle, and high school buildings provided: * Support of basic skills among kindergarteners and their families at Fernway and Lomond elementary schools; * Materials to enhance reading, spelling, writing, and social studies programs, as well as a compost project in the K-4 buildings; * Support for after-school math and reading and Woodbury Creating Change at Woodbury; * An artist-in-residence, literary arts magazine, and study of slave trade at Shaker Middle School; * Continued expansion of the Learning Garden, purchase of a backdrop for show choir, and help with purchase of a new crew boat at Shaker Heights High School.

Woodbury Creating Change featured hand-made tapas plates; Onaway students built a compost bin; and the Crew team purchased a new boat, all thanks to support from the Shaker Schools Foundation.

Cash and Investments (at market, beginning of year)

Cash and Investments (at market, end of year)

The Legacy Society The Shaker Schools Foundation is raising a permanent endowment to provide long-term, substantial support to the Shaker Schools in the areas of academia, arts, technology, health and fitness, and special initiatives. Bequests, trusts, other planned gifts, and outright gifts are being accepted. These contributions will help ensure the enrichment of education in the Shaker Heights Schools far into the future. Donors who make an outright gift or indicate that they have provided for the Foundation in their estate planning are entitled to membership in the Legacy Society. In Memory of Bruce Abrams Stuart Abrams Ruth S. Affelder Reading Fund Herbert Ascherman Jr. Christine Auginas Joan Ball Deborah Beim Cathy Belk George and Margaret Cannon Bill and Jennifer Clawson In Memory of Christopher Covert Deborah Cowan Mr. and Mrs. Rand M. Curtiss Sarajane and Sam Dolinsky Susan Fainstein Mark Freeman Ann and Scott Garson In Memory of Barbara Geismer In Memory of Edward Gilfeather Steven and Gail Goldfarb Grant Kohn Goodman Betty and Karl Hess Rick and Annie Hubbard In Memory of David Stuart Inglis Helen L. Ittner Robin D. Johnson J. Stephen and Kathy Jones Bernard and Nancy Karr Matthew and Julie Lehman Dr. and Mrs. Gilbert Lowenthal Neil and Susan Luria In Memory of Greg Malin

Executive Committee Sarah Morgan Hallie Stewart Tracy Peebles Theresa Walsh Shaker Schools Liaison Christine Auginas The Friends of the Shaker Schools Foundation presented the twentyfourth A Night for the Red & White on March 5, 2016, at the Tudor Arms Hotel, Doubletree by Hilton. Nearly 800 devoted friends of the Shaker Schools enjoyed a wonderful party. Thanks to the generosity of corporate sponsors, ticket buyers, and donors, the event raised more than $130,000 for the enhancement of technology, the arts, humanities, and health and fitness in each of the Shaker Heights City Schools. This yearâ&#x20AC;&#x2122;s party enjoyed the support of 23 sponsors. Very special thanks go to the Arminius Foundation, Hahn Loeser & Parks LLP, Huntington National Bank, and Tucker Ellis LLP, our Benefactors and most generous donors. We extend appreciation to the following Patrons, who give at the next highest level: Benesch, Friedlander, Coplan & Aronoff LLP; KeyBank; Squire Patton Boggs LLP; Ulmer & Berne LLP; and University Hospitals Ahuja Medical Center. The Foundation also is grateful to our Fellows: Anthem Blue Cross and Blue Shield, Calvetta Brothers Floor Show, CIMA Plastics Group, CLE Music Group, C.P. Braman & Co., Inc., DDR Corp., Ellen Seguin Design, Hogan Transportation, Karlovec & Company Design/Build Remodel, Legacy Capital Partners, Liberty Ford Solon, Thorman Petrov Group, and TorqHoist. As sponsors of the Shaker Schools Foundation, these organizations receive recognition at A Night for the Red & White and at Foundation events and in Foundation publications throughout the calendar year. Many thanks and sincere congratulations to the volunteers who spent countless hours planning the 2016 event â&#x20AC;&#x201C; and to the community for its dedicated and loyal support.