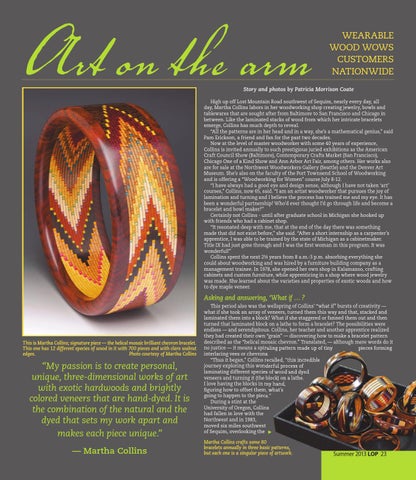 Art on the arm

High up off Lost Mountain Road southwest of Sequim, nearly every day, all day, Martha Collins labors in her woodworking shop creating jewelry, bowls and tablewares that are sought after from Baltimore to San Francisco and Chicago in between. Like the laminated stacks of wood from which her intricate bracelets emerge, Collins has much depth to reveal. “All the patterns are in her head and in a way, she’s a mathematical genius,” said Pam Erickson, a friend and fan for the past two decades. Now at the level of master woodworker with some 40 years of experience, Collins is invited annually to such prestigious juried exhibitions as the American Craft Council Show (Baltimore), Contemporary Crafts Market (San Francisco), Chicago One of a Kind Show and Ann Arbor Art Fair, among others. Her works also are for sale at the Northwest Woodworkers Gallery (Seattle) and the Denver Art Museum. She’s also on the faculty of the Port Townsend School of Woodworking and is offering a “Woodworking for Women” course July 8-12. “I have always had a good eye and design sense, although I have not taken ‘art’ courses,” Collins, now 65, said. “I am an artist woodworker that pursues the joy of lamination and turning and I believe the process has trained me and my eye. It has been a wonderful partnership! Who’d ever thought I’d go through life and become a bracelet and bowl maker?” Certainly not Collins - until after graduate school in Michigan she hooked up with friends who had a cabinet shop. “It resonated deep with me, that at the end of the day there was something made that did not exist before,” she said. “After a short internship as a carpenter’s apprentice, I was able to be trained by the state of Michigan as a cabinetmaker. Title IX had just gone through and I was the first woman in this program. It was wonderful!” Collins spent the next 2½ years from 8 a.m.-3 p.m. absorbing everything she could about woodworking and was hired by a furniture building company as a management trainee. In 1978, she opened her own shop in Kalamazoo, crafting cabinets and custom furniture, while apprenticing in a shop where wood jewelry was made. She learned about the varieties and properties of exotic woods and how to dye maple veneer.

Asking and answering, ‘What if … ?

This is Martha Collins; signature piece — the helical mosaic brilliant chevron bracelet. This one has 12 different species of wood in it with 700 pieces and with claro walnut edges. Photo courtesy of Martha Collins

“My passion is to create personal, unique, three-dimensional works of art with exotic hardwoods and brightly colored veneers that are hand-dyed. It is the combination of the natural and the dyed that sets my work apart and makes each piece unique.” — Martha Collins

This period also was the wellspring of Collins’ “what if” bursts of creativity — what if she took an array of veneers, turned them this way and that, stacked and laminated them into a block? What if she staggered or fanned them out and then turned that laminated block on a lathe to form a bracelet? The possibilities were endless — and serendipitous. Collins, her teacher and another apprentice realized they had created their own “grain” — discovering how to make a bracelet pattern described as the “helical mosaic chevron.” Translated, — although mere words do it no justice — it means a spiraling pattern made up of tiny pieces forming interlacing vees or chevrons. “Thus it began,” Collins recalled, “this incredible journey exploring this wonderful process of laminating different species of wood and dyed veneers and turning it (the block) on a lathe. I love having the blocks in my hand, figuring how to offset them, what’s going to happen to the piece.” During a stint at the University of Oregon, Collins had fallen in love with the Northwest and in 1983, moved six miles southwest of Sequim, overlooking the Martha Collins crafts some 80 bracelets annually in three basic patterns, but each one is a singular piece of artwork. 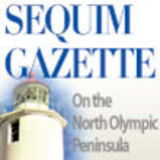 Living on the Peninsula

Living on the Peninsula