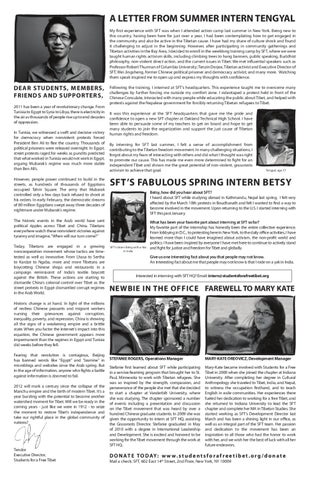 A LETTER FROM SUMMER INTERN TENGYAL My first experience with SFT was when I attended action camp last summer in New York. Being new to this country, having been here for just over a year, I had been contemplating how to get engaged in the community and also be active in the Tibetan cause. I have had my share of culture shock and found it challenging to adjust in the beginning. However, after participating in community gatherings and Tibetan activities in the Bay Area, I decided to enroll in the weeklong training camp by SFT, where we were taught human rights activism skills, including climbing trees to hang banners, public speaking, Buddhist philosophy, non-violent direct action, and the current issues in Tibet. We met influential speakers such as Professor Robert Thurman of Columbia University; Tenzin Dorjee, Tibetan activist and Executive Director of SFT; Wei Jingsheng, former Chinese political prisoner and democracy activist; and many more. Watching them speak inspired me to open up and express my thoughts with confidence.

DEAR STUDENTS, MEMBERS, FRIENDS AND SUPPORTERS, 2011 has been a year of revolutionary change. From Tunisia to Egypt to Syria to Libya, there is electricity in the air as thousands of people rise up to end decades of oppression. In Tunisia, we witnessed a swift and decisive victory for democracy when nonviolent protests forced President Ben Ali to flee the country. Thousands of political prisoners were released overnight. In Egypt, street protests raged for weeks as pundits predicted that what worked in Tunisia would not work in Egypt, arguing Mubarak’s regime was much more stable than Ben Ali’s. However, people power continued to build in the streets, as hundreds of thousands of Egyptians occupied Tahrir Square. The army that Mubarak controlled only a few days back refused to shoot at his orders. In early February, the democratic dreams of 80 million Egyptians swept away three decades of nightmare under Mubarak’s regime.

Following the training, I interned at SFT’s headquarters. This experience taught me to overcome many challenges by further forcing me outside my comfort zone. I videotaped a protest held in front of the Chinese Consulate, interacted with many people while educating the public about Tibet, and helped with protests against the Nepalese government for forcibly returning Tibetan refugees to Tibet. It was this experience at the SFT headquarters that gave me the pride and confidence to open a new SFT chapter at Oakland Technical High School. I have been able to persuade some of my teachers to get on board and hope to get many students to join the organization and support the just cause of Tibetan human rights and freedom. By interning for SFT last summer, I felt a sense of accomplishment from contributing to the Tibetan freedom movement. In many challenging situations, I forgot about my fears of interacting with others and did what I thought was right to promote our cause. This has made me even more determined to fight for an independent Tibet and shown me the great potential of non-violent, grassroots activism to achieve that goal.

SFT’S FABULOUS SPRING INTERN BETSY Betsy, how did you hear about SFT? I heard about SFT while studying abroad in Kathmandu, Nepal last spring. I felt very affected by the March 10th protests in Boudhanath and felt I wanted to find a way to become involved in the movement. Upon returning to the U.S. I started interning with SFT this past January.

The historic events in the Arab world have sent political ripples across Tibet and China. Tibetans everywhere watch these nonviolent victories against tyranny and imagine, “When will our turn come?” Today, Tibetans are engaged in a growing noncooperation movement whose tactics are timetested as well as innovative. From Lhasa to Sertha to Kardze to Ngaba, more and more Tibetans are boycotting Chinese shops and restaurants in a campaign reminiscent of India’s textile boycott against the British. These actions are starting to dismantle China’s colonial control over Tibet as the street protests in Egypt dismantled corrupt regimes in the Arab World.

SFT’s Intern Betsy with a Yak in India

What has been your favorite part about interning at SFT so far? My favorite part of the internship has honestly been the entire collective experience. From lobbying in D.C., to protesting here in New York, to the daily office activities, I have learned more than I could have imagined about activism, the non-profit world and politics. I have been inspired by everyone I have met here to continue to actively stand and fight for justice and freedom for Tibet and globally. Give us one interesting fact about you that people may not know. An interesting fact about me that people may not know is that I rode on a yak in India.

NEWBIE IN THE OFFICE FAREWELL TO MARY KATE

Historic change is at hand. In light of the millions of restless Chinese peasants and migrant workers nursing their grievances against corruption, inequality, poverty, and repression, China is showing all the signs of a weakening empire and a brittle state. When you factor the internet’s impact into this equation, the Chinese government appears more impermanent than the regimes in Egypt and Tunisia did weeks before they fell. Fearing that revolution is contagious, Beijing has banned words like “Egypt” and “Jasmine” in microblogs and websites since the Arab spring. But in the age of information, anyone who fights a battle against information is doomed to fail. 2012 will mark a century since the collapse of the Manchu empire and the birth of modern Tibet. It’s a year bursting with the potential to become another watershed moment for Tibet. Will we be ready in the coming years - just like we were in 1912 - to seize the moment to restore Tibet’s independence and take our rightful place in the global community of nations?

Stefanie first learned about SFT while participating in a service/learning program that brought her to St. Paul, Minnesota to work with Tibetan refugees. She was so inspired by the strength, compassion, and perseverance of the people she met that she decided to start a chapter at Vanderbilt University, where she was studying. The chapter sponsored a number of events including a presentation and discussion on the Tibet movement that was heard by over a hundred Chinese graduate students. In 2009 she was given the opportunity to intern at SFT HQ, assisting the Grassroots Director. Stefanie graduated in May of 2010 with a degree in International Leadership and Development. She is excited and honored to be working for the Tibet movement through the work at SFT HQ.

Mary-Kate became involved with Students for a Free Tibet in 2000 when she joined the chapter at Indiana University. After completing her degree in Cultural Anthropology she traveled to Tibet, India, and Nepal, to witness the occupation firsthand, and to teach English in exile communities. Her experiences there fueled her dedication to working for a free Tibet, and she returned to Indiana University to lead the SFT chapter and complete her MA in Tibetan Studies. She started working as SFT’s Development Director last March and has been a shining light in our office, as well as an integral part of the SFT team. Her passion and dedication to the movement has been an inspiration to all those who had the honor to work with her, and we wish her the best of luck with all her future endeavors. 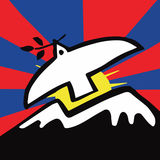