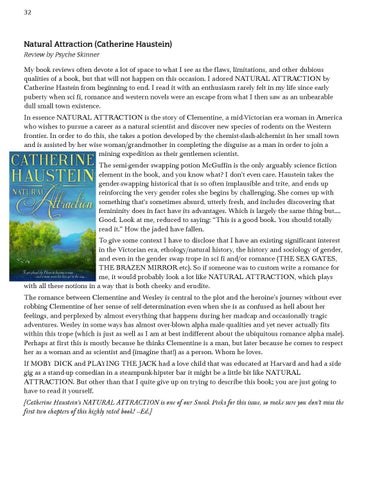 My book reviews often devote a lot of space to what I see as the flaws, limitations, and other dubious qualities of a book, but that will not happen on this occasion. I adored NATURAL ATTRACTION by Catherine Hastein from beginning to end. I read it with an enthusiasm rarely felt in my life since early puberty when sci fi, romance and western novels were an escape from what I then saw as an unbearable dull small town existence. In essence NATURAL ATTRACTION is the story of Clementine, a mid-Victorian era woman in America who wishes to pursue a career as a natural scientist and discover new species of rodents on the Western frontier. In order to do this, she takes a potion developed by the chemist-slash-alchemist in her small town and is assisted by her wise woman/grandmother in completing the disguise as a man in order to join a mining expedition as their gentlemen scientist. The semi-gender swapping potion McGuffin is the only arguably science fiction element in the book, and you know what? I don’t even care. Haustein takes the gender-swapping historical that is so often implausible and trite, and ends up reinforcing the very gender roles she begins by challenging. She comes up with something that&#39;s sometimes absurd, utterly fresh, and includes discovering that femininity does in fact have its advantages. Which is largely the same thing but…. Good. Look at me, reduced to saying: “This is a good book. You should totally read it.” How the jaded have fallen. To give some context I have to disclose that I have an existing significant interest in the Victorian era, ethology/natural history, the history and sociology of gender, and even in the gender swap trope in sci fi and/or romance (THE SEX GATES, THE BRAZEN MIRROR etc). So if someone was to custom write a romance for me, it would probably look a lot like NATURAL ATTRACTION, which plays with all these notions in a way that is both cheeky and erudite. The romance between Clementine and Wesley is central to the plot and the heroine’s journey without ever robbing Clementine of her sense of self-determination even when she is as confused as hell about her feelings, and perplexed by almost everything that happens during her madcap and occasionally tragic adventures. Wesley in some ways has almost over-blown alpha male qualities and yet never actually fits within this trope (which is just as well as I am at best indifferent about the ubiquitous romance alpha male). Perhaps at first this is mostly because he thinks Clementine is a man, but later because he comes to respect her as a woman and as scientist and (imagine that!) as a person. Whom he loves. If MOBY DICK and PLAYING THE JACK had a love child that was educated at Harvard and had a side gig as a stand-up comedian in a steampunk-hipster bar it might be a little bit like NATURAL ATTRACTION. But other than that I quite give up on trying to describe this book; you are just going to have to read it yourself. [Catherine Haustein&#39;s NATURAL ATTRACTION is one of our Sneak Peeks for this issue, so make sure you don&#39;t miss the first two chapters of this highly rated book! —Ed.]

We're two years old! Join us in celebrating with lots of reviews, a trip to Australia and a touching short story 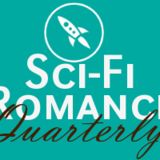