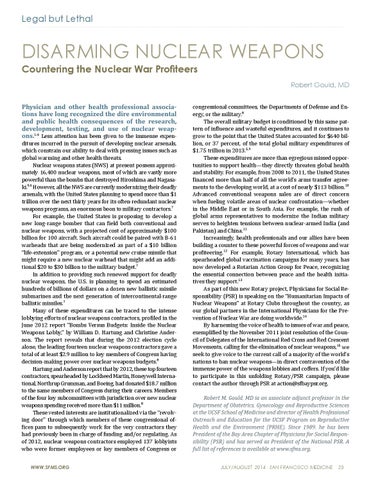 DISARMING NUCLEAR WEAPONS Countering the Nuclear War Profiteers Robert Gould, MD Physician and other health professional associations have long recognized the dire environmental and public health consequences of the research, development, testing, and use of nuclear weapons.1-4 Less attention has been given to the immense expen-

ditures incurred in the pursuit of developing nuclear arsenals, which constrain our ability to deal with pressing issues such as global warming and other health threats. Nuclear weapons states (NWS) at present possess approximately 16,400 nuclear weapons, most of which are vastly more powerful than the bombs that destroyed Hiroshima and Nagasaki.5,6 However, all the NWS are currently modernizing their deadly arsenals, with the United States planning to spend more than $1 trillion over the next thirty years for its often-redundant nuclear weapons programs, an enormous boon to military contractors.7 For example, the United States is proposing to develop a new long-range bomber that can field both conventional and nuclear weapons, with a projected cost of approximately $100 billion for 100 aircraft. Such aircraft could be paired with B-61 warheads that are being modernized as part of a $10 billion “life-extension” program, or a potential new cruise missile that might require a new nuclear warhead that might add an additional $20 to $30 billion to the military budget.7 In addition to providing such renewed support for deadly nuclear weapons, the U.S. is planning to spend an estimated hundreds of billions of dollars on a dozen new ballistic missile submarines and the next generation of intercontinental-range ballistic missiles.7 Many of these expenditures can be traced to the intense lobbying efforts of nuclear weapons contractors, profiled in the June 2012 report “Bombs Versus Budgets: Inside the Nuclear Weapons Lobby,” by William D. Hartung and Christine Anderson. The report reveals that during the 2012 election cycle alone, the leading fourteen nuclear weapons contractors gave a total of at least $2.9 million to key members of Congress having decision-making power over nuclear weapons budgets.8 Hartung and Anderson report that by 2012, these top fourteen contractors, spearheaded by Lockheed Martin, Honeywell International, Northrup Grumman, and Boeing, had donated $18.7 million to the same members of Congress during their careers. Members of the four key subcommittees with jurisdiction over new nuclear weapons spending received more than $11 million.8 These vested interests are institutionalized via the “revolving door” through which members of these congressional offices pass to subsequently work for the very contractors they had previously been in charge of funding and/or regulating. As of 2012, nuclear weapons contractors employed 137 lobbyists who were former employees or key members of Congress or WWW.SFMS.ORG

congressional committees, the Departments of Defense and Energy, or the military.8 The overall military budget is conditioned by this same pattern of influence and wasteful expenditures, and it continues to grow to the point that the United States accounted for $640 billion, or 37 percent, of the total global military expenditures of $1.75 trillion in 2013.5,9 These expenditures are more than egregious missed opportunities to support health—they directly threaten global health and stability. For example, from 2008 to 2011, the United States financed more than half of all the world’s arms transfer agreements to the developing world, at a cost of nearly $113 billion.10 Advanced conventional weapons sales are of direct concern when fueling volatile areas of nuclear confrontation—whether in the Middle East or in South Asia. For example, the rush of global arms representatives to modernize the Indian military serves to heighten tensions between nuclear-armed India (and Pakistan) and China.11 Increasingly, health professionals and our allies have been building a counter to these powerful forces of weapons and war profiteering.12 For example, Rotary International, which has spearheaded global vaccination campaigns for many years, has now developed a Rotarian Action Group for Peace, recognizing the essential connection between peace and the health initiatives they support.13 As part of this new Rotary project, Physicians for Social Responsibility (PSR) is speaking on the “Humanitarian Impacts of Nuclear Weapons” at Rotary Clubs throughout the country, as our global partners in the International Physicians for the Prevention of Nuclear War are doing worldwide.14 By harnessing the voice of health to issues of war and peace, exemplified by the November 2011 joint resolution of the Council of Delegates of the International Red Cross and Red Crescent Movements, calling for the elimination of nuclear weapons,15 we seek to give voice to the current call of a majority of the world’s nations to ban nuclear weapons—in direct contravention of the immense power of the weapons lobbies and coffers. If you’d like to participate in this unfolding Rotary/PSR campaign, please contact the author through PSR at action@sfbaypsr.org. Robert M. Gould, MD ia an associate adjunct professor in the Department of Obstetrics, Gynecology and Reproductive Sciences at the UCSF School of Medicine and director of Health Professional Outreach and Education for the UCSF Program on Reproductive Health and the Environment (PRHE). Since 1989, he has been President of the Bay Area Chapter of Physicians for Social Responsibility (PSR) and has served as President of the National PSR. A full list of references is available at www.sfms.org. JULY/AUGUST 2014 SAN FRANCISCO MEDICINE 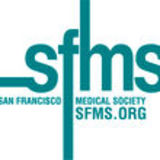