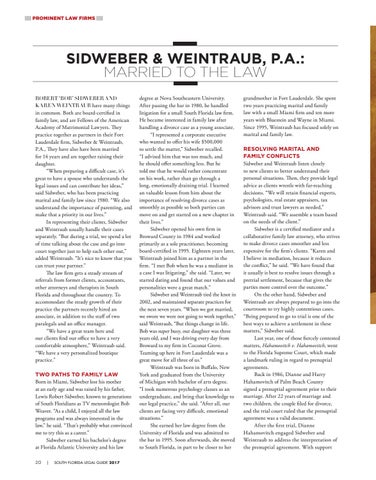 SIDWEBER &amp; WEINTRAUB, P.A.: MARRIED TO THE LAW ROBERT “BOB” SIDWEBER AND K AREN WEINTR AUB have many things in common. Both are board-certified in family law, and are Fellows of the American Academy of Matrimonial Lawyers. They practice together as partners in their Fort Lauderdale firm, Sidweber &amp; Weintraub, P.A., They have also have been married for 14 years and are together raising their daughter. “When preparing a difficult case, it’s great to have a spouse who understands the legal issues and can contribute her ideas,” said Sidweber, who has been practicing marital and family law since 1980. “We also understand the importance of parenting, and make that a priority in our lives.” In representing their clients, Sidweber and Weintraub usually handle their cases separately. “But during a trial, we spend a lot of time talking about the case and go into court together just to help each other out,” added Weintraub. “It’s nice to know that you can trust your partner.” The law firm gets a steady stream of referrals from former clients, accountants, other attorneys and therapists in South Florida and throughout the country. To accommodate the steady growth of their practice the partners recently hired an associate, in addition to the staff of two paralegals and an office manager. “We have a great team here and our clients find our office to have a very comfortable atmosphere,” Weintraub said. “We have a very personalized boutique practice.” TWO PATHS TO FAMILY LAW Born in Miami, Sidweber lost his mother at an early age and was raised by his father, Lewis Robert Sidweber, known to generations of South Floridians as TV meteorologist Bob Weaver. “As a child, I enjoyed all the law programs and was always interested in the law,” he said. “That’s probably what convinced me to try this as a career.” Sidweber earned his bachelor’s degree at Florida Atlantic University and his law 20

degree at Nova Southeastern University. After passing the bar in 1980, he handled litigation for a small South Florida law firm. He became interested in family law after handling a divorce case as a young associate. “I represented a corporate executive who wanted to offer his wife $500,000 to settle the matter,” Sidweber recalled. “I advised him that was too much, and he should offer something less. But he told me that he would rather concentrate on his work, rather than go through a long, emotionally draining trial. I learned an valuable lesson from him about the importance of resolving divorce cases as smoothly as possible so both parties can move on and get started on a new chapter in their lives.” Sidweber opened his own firm in Broward County in 1984 and worked primarily as a sole practitioner, becoming board-certified in 1995. Eighteen years later, Weintraub joined him as a partner in the firm. “I met Bob when he was a mediator in a case I was litigating,” she said. “Later, we started dating and found that our values and personalities were a great match.” Sidweber and Weintraub tied the knot in 2002, and maintained separate practices for the next seven years. “When we got married, we swore we were not going to work together,” said Weintraub, “But things change in life. Bob was super busy, our daughter was three years old, and I was driving every day from Broward to my firm in Coconut Grove. Teaming up here in Fort Lauderdale was a great move for all three of us.” Weintraub was born in Buffalo, New York and graduated from the University of Michigan with bachelor of arts degree. “I took numerous psychology classes as an undergraduate, and bring that knowledge to our legal practice,” she said. “After all, our clients are facing very difficult, emotional situations.” She earned her law degree from the University of Florida and was admitted to the bar in 1995. Soon afterwards, she moved to South Florida, in part to be closer to her

grandmother in Fort Lauderdale. She spent two years practicing marital and family law with a small Miami firm and ten more years with Bluestein and Wayne in Miami. Since 1995, Weintraub has focused solely on marital and family law. RESOLVING MARITAL AND FAMILY CONFLICTS Sidweber and Weintraub listen closely to new clients to better understand their personal situations. Then, they provide legal advice as clients wrestle with far-reaching decisions. “We will retain financial experts, psychologists, real estate appraisers, tax advisors and trust lawyers as needed,” Weintraub said. “We assemble a team based on the needs of the client.” Sidweber is a certified mediator and a collaborative family law attorney, who strives to make divorce cases smoother and less expensive for the firm’s clients. “Karen and I believe in mediation, because it reduces the conflict,” he said. “We have found that it usually is best to resolve issues through a pretrial settlement, because that gives the parties more control over the outcome.” On the other hand, Sidweber and Weintraub are always prepared to go into the courtroom to try highly contentious cases. “Being prepared to go to trial is one of the best ways to achieve a settlement in these matters,” Sidweber said. Last year, one of those fiercely contested matters, Hahamovitch v. Hahamovitch, went to the Florida Supreme Court, which made a landmark ruling in regard to prenuptial agreements. Back in 1986, Dianne and Harry Hahamovitch of Palm Beach County signed a prenuptial agreement prior to their marriage. After 22 years of marriage and two children, the couple filed for divorce, and the trial court ruled that the prenuptial agreement was a valid document. After the first trial, Dianne Hahamovitch engaged Sidweber and Weintraub to address the interpretation of the prenuptial agreement. With support

The 17th edition of the South Florida Legal Guide features profiles of four distinguished attorneys, three prominent law firms and the tri-counties' three State Attorneys and three Public Defenders , in addition to it annual lists of Top Lawyers, Top Law Firms, Top Up and Comers, and Top CPAs and other Financial Professionals in South Florida selected via an annual peer nomination process. 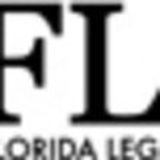