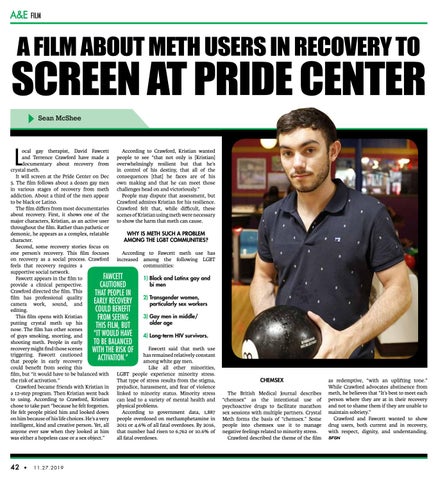 A Film About Meth Users in Recovery to

ocal gay therapist, David Fawcett According to Crawford, Kristian wanted and Terrence Crawford have made a people to see “that not only is [Kristian] documentary about recovery from overwhelmingly resilient but that he’s crystal meth. in control of his destiny, that all of the It will screen at the Pride Center on Dec consequences [that] he faces are of his 5. The film follows about a dozen gay men own making and that he can meet those in various stages of recovery from meth challenges head on and victoriously.” addiction. About a third of the men appear People may dispute that assessment, but to be black or Latino. Crawford admires Kristian for his resilience. The film differs from most documentaries Crawford felt that, while difficult, these about recovery. First, it shows one of the scenes of Kristian using meth were necessary major characters, Kristian, as an active user to show the harm that meth can cause. throughout the film. Rather than pathetic or demonic, he appears as a complex, relatable Why is meth such a problem character. among the LGBT communities? Second, some recovery stories focus on one person’s recovery. This film focuses According to Fawcett meth use has on recovery as a social process. Crawford increased among the following LGBT feels that recovery requires a communities: supportive social network. Fawcett Fawcett appears in the film to 1) Black and Latinx gay and provide a clinical perspective. bi men cautioned Crawford directed the film. This that people in film has professional quality 2) Transgender women, early recovery camera work, sound, and particularly sex workers could benefit editing. This film opens with Kristian 3) Gay men in middle/ from seeing putting crystal meth up his older age this film, but nose. The film has other scenes “it would have 4) Long-term HIV survivors. of guys smoking, snorting, and shooting meth. People in early to be balanced recovery might find those scenes Fawcett said that meth use with the risk of triggering. Fawcett cautioned has remained relatively constant activation.” that people in early recovery among white gay men. could benefit from seeing this Like all other minorities, film, but “it would have to be balanced with LGBT people experience minority stress. the risk of activation.” That type of stress results from the stigma, Crawford became friends with Kristian in prejudice, harassment, and fear of violence a 12-step program. Then Kristian went back linked to minority status. Minority stress to using. According to Crawford, Kristian can lead to a variety of mental health and chose to take part “because he felt forgotten. physical problems. He felt people pitied him and looked down According to government data, 1,887 on him because of his life choices. He’s a very people overdosed on methamphetamine in intelligent, kind and creative person. Yet, all 2011 or 4.6% of all fatal overdoses. By 2016, anyone ever saw when they looked at him that number had risen to 6,762 or 10.6% of was either a hopeless case or a sex object.” all fatal overdoses.

Chemsex The British Medical Journal describes “chemsex” as the intentional use of psychoactive drugs to facilitate marathon sex sessions with multiple partners. Crystal Meth forms the basis of “chemsex.” Some people into chemsex use it to manage negative feelings related to minority stress. Crawford described the theme of the film

as redemptive, “with an uplifting tone.” While Crawford advocates abstinence from meth, he believes that “It’s best to meet each person where they are at in their recovery and not to shame them if they are unable to maintain sobriety.” Crawford and Fawcett wanted to show drug users, both current and in recovery, with respect, dignity, and understanding. 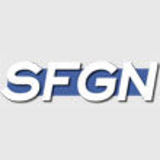