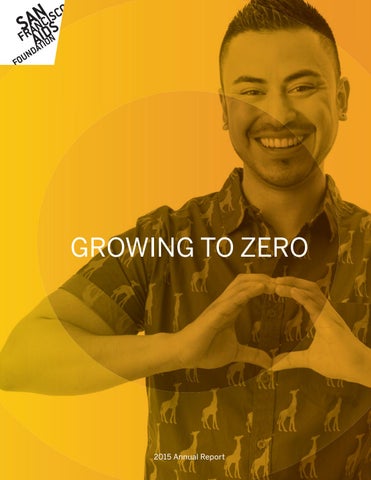 TOGETHER, WE’RE GROWING TO ZERO. In 2015, San Francisco garnered national headlines with our citywide goal of reaching zero new infections, zero preventable AIDS-related deaths, and zero HIV infections. It’s been called bold and audacious, it was recognized by the White House, and it’s caused people around the country to note our remarkable progress. Our story is only partly about medical breakthroughs and innovative policy—it’s also about heart, compassion, and the shared sense of purpose that binds us. At San Francisco AIDS Foundation, we’ve always put people first. Our leadership in the city’s Getting to Zero initiative is driven by the same priorities: to recognize strength in diversity, include all who have a stake in this effort, and support people to live full, healthy lives. For us, Growing to Zero means moving beyond a laser-focus on a virus. Being healthy means many things, but it starts and ends with being whole. That’s true for individuals, organizations, and communities. In this report on our 2015 successes, we’ll highlight the great new steps we’ve taken to bring new HIV transmissions to zero. This year we opened Strut, our fully integrated health and wellness center on Castro Street; launched an initiative to better meet the needs of people of transgender experience; deepened our investment in PrEP; made a priority of health navigation, ensuring that our clients can take control of their health and their lives; and much, much more. We’re doing work that’s changing the world, and it’s transforming who we are, too. We’re proud of the growth we see among our staff, volunteers, donors, and clients, and we’re proud to be leading a nationwide conversation. Here’s to our next great year—all of us in it together, growing ever stronger.

Chair, Board of Directors

1 23 In 2015, we unveiled an ambitious but achievable five-year strategic plan and made an unwavering commitment to these three, bold, interconnected goals.

WE WILL BUILD Healthier Communities We’re nurturing resilience in individuals and social groups, while reducing the harm associated with alcohol and other drugs.

GETTING STRONGER We’ve realigned our portfolio of free programs and services into four comprehensive categories that deepen and improve the experience of clients in our care. HEALTH NAVIGATION SERVICES

SUBSTANCE USE AND MENTAL HEALTH

We support people impacted by HIV by addressing

barriers to care, linking people to medical care and

We provide safe spaces to manage or stop using

financial assistance, and helping them sustain

substances, reduce the negative effects they

can have on people’s lives and relationships, and increase our clients’ health and wellbeing.

screenings and PrEP with a non-judgmental and

We create a sense of inclusion and belonging while

combating the social isolation and stigma that are barriers to treatment and prevention.

When people come to us with specific needs, we welcome them into a fully integrated network of services. We look beyond the “problem” and make connections that might not have otherwise been considered.

RESPONDING DECISIVELY Growing to Zero means no one is left out. Serving our ever-evolving community demands fresh thinking. As new needs arise, we continue to respond creatively, effectively, and decisively. These exciting milestones were among our many highlights from 2015: PREVENTION We made PrEP (pre-exposure prophylaxis), a oncedaily pill that protects against HIV transmission,

a pillar of our work by:

• Creating PrEP Navigators, a new staff position, to help clients access and pay for PrEP • Participating in the government-sponsored

340B drug discount program to obtain low-cost prescriptions for clients • Training 600 regional health care providers in how to provide PrEP for their constituents • Hosting a PrEP open house, and expanding prepfacts.org, to empower consumers • Starting 706 people on PrEP at our clinics

of Bridgemen, which brings gay, bi, and trans men

The launch of TransLife met a crucial need for

out of isolation through quality programs, social

trans, queer, and gender-fluid individuals. In this

events, and projects that give back to the community.

and practical aspects of living well.

SUCCESS COUNTS. We never lose sight of the fact that every number is a stand-in for a real person with real needs who has made a connection to the transformative work we do. We made a remarkable impact in 2015.

3,638,835 People visiting our online resources for education, support, and referrals

OPENING NEW DOORS The biggest dreams can grow from the simplest ideas: What if we could better meet the needs of people who depend on us by moving more of what we do to a single site? Last year, this dream came to life with Strut, our new, fully integrated health and wellness center for gay, bi, and trans men in the Castro. Strut starts with the idea that getting to zero new HIV transmissions means thinking holistically. Part clinic, part community center, Strut offers a dynamic model of care, where people are celebrated for who they are and how they love—and no one is treated as a series of risk factors or problems to be solved. Someone coming to us with questions about PrEP and HIV prevention might also be seeking ways to connect socially with peers. Another person tackling substance use might also have concerns about mental health. A long-term survivor looking for advice about medication might also benefit from wellness programs. Strut provides a “one-stop shop” for our clients and greater collaboration among our staff and volunteers. Strut is open for business thanks to the diverse, generous donors to the Campaign for Health & Wellness, which made its public debut in 2015. At press time, the Campaign had raised a staggering $13.8 million of its $15 million goal. Learn more about how you can get involved at strutsf.org/wellnesscampaign. We extend our sincere gratitude to our Campaign contributors. Their gifts have opened new doors.

The Honorable Scott Wiener The City & County of San Francisco

* Employers listed for affiliation purpose only

TRANSFORMING LIVES There is strength in numbers. Our long-standing relationships with organizations doing HIV work in San Francisco are getting even better-coordinated under the Getting to Zero initiative. As we make San Francisco the first city to end HIV transmission, we’ve collectively set priority areas to ensure all of our work fits together in a way that most benefits the communities we serve. COORDINATED PREP PROGRAMS

to ensure newly diagnosed people get fast access to

Uptake of PrEP has reached a tipping point. We’ve

treatment because getting and staying undetectable

made it our business to empower people—especially

is a key part of Growing to Zero.

those most at risk—to learn about and get PrEP. Key to this are our PrEP Navigators, full-time professionals

who make sure those who want PrEP will be able to

Helping people afford, access, and adhere to treatments means thinking broadly about the

Getting people who test positive for HIV to start

the person living with HIV and drastically reduces the

and others’ so that our clients can make and

risk of transmission. We’re working with our partners

SPEAKING OUT What happens in San Francisco doesn’t stay in San Francisco. In 2015, our policy experts and other staff members raised their voices at government and scientific meetings, international conferences, and at the White House on World AIDS Day. Staff member Vince Crisostomo was honored by POZ magazine as one of the 100 most important HIV advocates. When the voices of San Francisco AIDS Foundation speak, people listen. WE PUT PREP IN THE STATE BUDGET

With the California HIV Alliance, we successfully advocated

for $2 million for PrEP navigation and education services

we reversed budget cuts that would have taken $119.5

statewide. This money will be used to help people interested

million away from Ryan White funding, HIV care for

people of racial and ethnic minorities, substance use

WE INCREASED SUBSIDIES FOR TREATMENT

WE ADVOCATED FOR FEDERAL FUNDING OF SYRINGE

Working with partners, we also successfully advocated to

increase the eligibility limit for the AIDS Drug Assistance

We lobbied the House Appropriations Committee to

lift the ban on federal funding for programs that

HIV to pay for their medications.

inject drugs, which operate to prevent the spread of communicable diseases.

WE MADE UP FOR FEDERAL CUTS IN HIV CARE Working with the Getting to Zero initiative, we advocated

WE PREVENTED SAN FRANCISCANS FROM

cuts made to HIV service programs. We also successfully

As a member of the National AIDS Housing Coalition,

advocated for an additional $1.1 million to rapid linkage

we negotiated provisions to minimize the harm from

to and retention in care projects and increased PrEP

GETTING THE WORD OUT

PLAYING YOUR PART Year round, events like AIDS/LifeCycle, Dining Out for Life, the Santa Skivvies Run, and the Big Gay 10K bring the wider community into our efforts to beat HIV. These events raise awareness around what HIV means today—where we’re at, where we’re going, and how everyone in our community has a part to play. In 2015, AIDS/LifeCycle, our annual event with the Los Angeles LGBT Center, broke fundraising records. Participants on the 7-day, 545-mile bike ride from San Francisco to Los Angeles helped raise $16.6 million. San Francisco AIDS Foundation works very hard to keep our cost of fundraising well below industry standards. We’re proud that 82 cents out of every $1 donated goes directly to the free programs and services offered to our clients. We’re so grateful to these top fundraisers from our 2015 events.

DO IT YOURSELF EVENTS Michael Bryce Max Hamilton Peter Quain

PUTTING YOUR TRUST IN US Four out of four stars. That’s the highest rating offered by Charity Navigator, the largest independent charity evaluator in the U.S. In 2015, Charity Navigator awarded San Francisco AIDS Foundation a 4-star, “exceptional” rating for sound fiscal management and commitment to accountability and transparency. This places us in the top 25% of rated charities in the country. We understand that when you make a donation to the foundation, you’re honoring not only what we do but how we go about doing it. You’re putting your trust in us. Growing to Zero means we don’t take that trust for granted.

Members of the Legacy Society have honored San Francisco AIDS Foundation by including us in their estate plans. We gratefully acknowledge the receipt of legacy gifts from the following estates made in 2015. Alberto Diaz Richard D. Ferrari Ann K. Hobbs Gary Allen Kean

GIVING HELPS US GROW We canâ&#x20AC;&#x2122;t grow to zero without the strong support of our individual, corporate, and institutional donors. Your generosity not only makes our work possible, it affirms your belief that weâ&#x20AC;&#x2122;re in it together. Whether you supported a participant in one of our fundraising events, donated at the Tribute Celebration, made a gift in response to a letter, or gave in some combination of these, you showed up for us in amazing ways in 2015. The following list reflects your cumulative 2015 investment in our work. Our heartfelt thanks goes out to everyone on this roster.

*Employers listed for affiliation purpose only

The financial information included herein is derived from our audited financial statements for the year ended June 30, 2015, a complete copy of which can be found on our website at www.sfaf.org/about-us/financial-information

We believe that San Francisco can be the first U.S. city to end the HIV epidemic. Every day, we provide free prevention and care services to people in hard-hit neighborhoodsâ&#x20AC;&#x201D;and advocate for them to public officialsâ&#x20AC;&#x201D;because we can envision the day when we beat HIV. 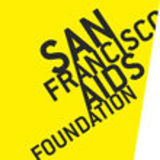