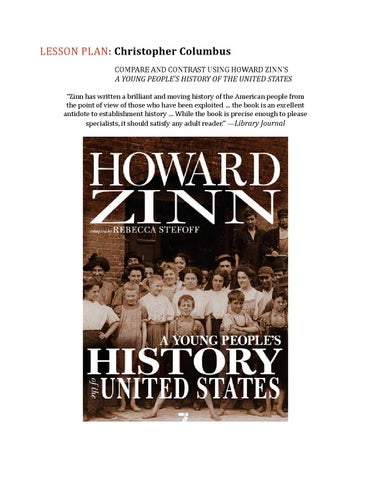 “Zinn has written a brilliant and moving history of the American people from the point of view of those who have been exploited … the book is an excellent antidote to establishment history … While the book is precise enough to please specialists, it should satisfy any adult reader.” —Library Journal

Overview OBJECTIVES: ­· To facilitate critical thinking about history and the various points of view from which our understanding of history comes. ­· To encourage organizational skills through use of graphic organizer. ­· To strengthen critical reading and thinking skills. AGE LEVEL: Grades 5 – 8 TIME:

What I learned about Christopher Columbus before

What I learned about Christopher Columbus in A Young Peopleâ&#x20AC;&#x2122;s History of the United States

The class will discuss what they have learned previously about Christopher Columbus. This part of the discussion should be informal, asking children to use their memories of such things as lessons on the “discovery” of America, and Columbus Day. Common ideas may be that Columbus was “brave,” “smart,” “enterprising,” “heroic,” etc. Some students may have experienced some of the alternative views on Christopher Columbus, and these should also be listed. While the students brainstorm, the teacher should write the words they come up with on the board and help them to fill them into the “What I Learned About Christopher Columbus Before” section of their venn diagrams.

“Columbus later wrote about the Indians in his ship’s log:...They would make fine servants...With fifth men we could subjugate [overpower] them and make them do whatever we want.” “As soon as he arrived on the island, he seized some Arawaks by force so that he could get information from them.” “The report Columbus made to the royal Spanish court was part fact, part fiction. He claimed to have reached Asia, and he called the Arawaks ‘Indians,’ meaning people of the Indies.” “Columbus, who was full of religious talk, later wrote, ‘Let us in the name of the Holy Trinity go on sending all the slaves that can be sold.’”

In the first chapter of A Young People’s History, Zinn tells of two people who told Columbus’ story, Bartolome de Las Casas and Samuel Eliot Morison. De Las Casas focused on cruelty to the Indians, and Morison focused on the idea of Columbus as a great man. Use the discussion in the chapter of these two men to lead the students in a discussion of how history gets told. Important questions to ask are, “How is it possible to have such different versions of events in history?” “Who determines how history gets told?” “Why do some voices get left out of history?” “How is it possible to tell the facts and still have a skewed view of what happened?” A Young People's History of the US Lesson Plan

A Young People's History of the US Lesson Plan