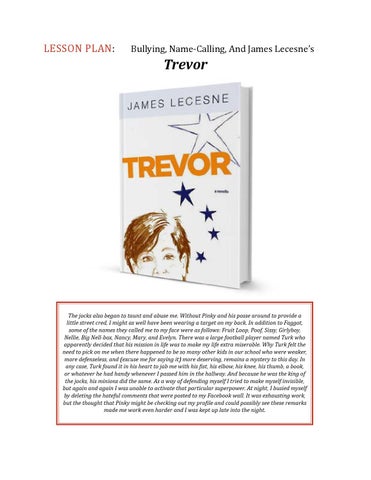 The jocks also began to taunt and abuse me. Without Pinky and his posse around to provide a little street cred, I might as well have been wearing a target on my back. In addition to Faggot, some of the names they called me to my face were as follows: Fruit Loop, Poof, Sissy, Girlyboy, Nellie, Big Nell-box, Nancy, Mary, and Evelyn. There was a large football player named Turk who apparently decided that his mission in life was to make my life extra miserable. Why Turk felt the need to pick on me when there happened to be so many other kids in our school who were weaker, more defenseless, and (excuse me for saying it) more deserving, remains a mystery to this day. In any case, Turk found it in his heart to jab me with his fist, his elbow, his knee, his thumb, a book, or whatever he had handy whenever I passed him in the hallway. And because he was the king of the jocks, his minions did the same. As a way of defending myself I tried to make myself invisible, but again and again I was unable to activate that particular superpower. At night, I busied myself by deleting the hateful comments that were posted to my Facebook wall. It was exhausting work, but the thought that Pinky might be checking out my profile and could possibly see these remarks made me work even harder and I was kept up late into the night.

OVERVIEW: Students will engage in a lesson plan based on James Lecesne’s novella Trevor that helps them identify instances of bullying in school, and its possible outcomes. Students will then use observational skill to record an incident of bullying or namecalling that they see in their own school. Lastly, students will use their imaginative powers to create a fictional environment in which name-calling and bullying do not exist. OBJECTIVES: · To increase students’ awareness of bullying and name-calling and its possible outcomes. · To encourage ways of thinking that break traditional thoughts on bullying and name-calling. · To increase observational skills. · Have students use their powers of imagination to create a better environment and ways to actualize it. TIME:

30 minute introduction, time spent observing on own, and 45 minutes for debrief and imaginative brainstorming.

After the class reads the entire novella, teachers should identify a section of James Lecesneâ&amp;#x20AC;&amp;#x2122;s Trevor that shows bullying or name calling (examples are the section in which Pinky gives Trevor the note calling him a weak person or the section in which Trevor goes into school and a homophobic slur has been scratched into his locker). Teachers should have students read these sections aloud during class and then enter into a discussion about bullying. * Who were the people involved? * Where did the incidents occur? * What tone were the comments or words used in? (was it said as a joke? as revenge? to be mean?) * What were the responses from the people involved or the bystanders? * Where were teachers, parents, and other adults? * If they were present, what were their responses? * What were the outcomes? Students should then be encouraged to share, without using names or specifics, whether or not they have ever been called a name in school, or been bullied and how it made them feel. Using the climax of the novel (Trevorâ&amp;#x20AC;&amp;#x2122;s suicide attempt) as a starting point, teachers should lead a discussion on what the possible outcomes of bullying are. The teacher should let students know they will be observing over the next day or so any incidents of bullying they see around them, and recording their observations.

Using the same questions used while discussing Trevor, students should record any incident of bullying they see around them in school over the day or two after the introduction of the lesson plan. Students should be reminded to keep the observations detailed but anonymous, so they feel comfortable doing the assignment. The questions for them to keep in mind are: * Who is involved? Record assumed age, grade, gender, and any other important characteristics of people involved, including perceived social group (jocks, nerds, theatre kids, etc). * Where does the incident take place? In the hall, playground, gym, or cafeteria? In the classroom? * What exactly is said? Is it said as a joke, to be mean, in retaliation for something? * Were other people watching? What did they say or do? * What was the response of the person who was being called a name or bullied? * Was there any outcome that you could observe? Did someone get punished? Did nothing happen at all?

Students should, in the class after the observation period, be encouraged to share their observations. After the sharing of observations, students should be either given time to write or to discuss the following idea: What would a school without bullying be like? Would people dress different? Act different? Would people be happier? Sadder? How would the things people say to each other be different? Also ask children to include their ideas of how such a vision can be reached. Would there be new rules? What would happen if people broke them? Let the children use their imagination. Also encourage children to come up with realistic ideas of how to create a school without bullying (ex: start an anti-name calling week, start a chapter of the Gay-Straight Alliance (GSA) at their school, etc). Referring back to the book, how might Trevor have acted differently (other than attempting suicide?) Older students can be asked to create a written report of this section of the lesson plan after the brainstorming is finished.

The Educator Resource Center of the Trevor Project: http://www.thetrevorproject.org/Education

According to the Trevor Project: “Lesbian, gay, bisexual, transgender and questioning (LGBTQ) youth who believe they have just one school staff member with whom they can talk about problems are only 1/3 as likely as those without that support to report being threatened or injured by a weapon at school or report making multiple suicide attempts in the past year.”