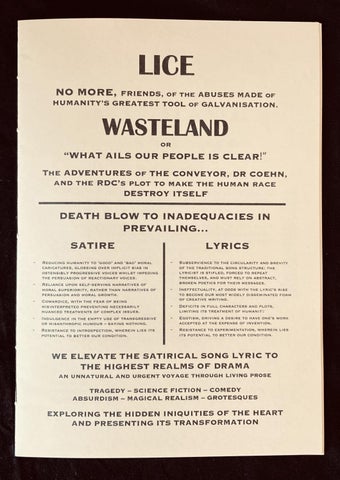 WASTELAND: What Ails Our People Is Clear

The text for LICE's 'WASTELAND: What Ails Our People Is Clear', published October 23rd 2020 via Settled Law Records. LICE's debut album of the same name (for which the main story forms the lyrics) is released January 8th 2021. In the wild, liminal space of the Wasteland, The Conveyor relates the schemes of the shadowy RDC and flamboyant Dr Coehn to engineer the human race’s self-annihilation: introducing us to a cast of time-travellers, shape-shifters, talking genitalia and ectoplasmic spectres. Arguing that we can build a new, more constructive landscape for satirical music (better dealing with implicit forms of bias) by unsettling the lyric's accepted role and forms, everything is always changing in WASTELAND. The transformation of characters' moral stances - along with their bodies and places in spacetime - is paralleled by the transformation of the text; the prose warping into soliloquies, cut-ups and even plays. 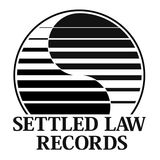