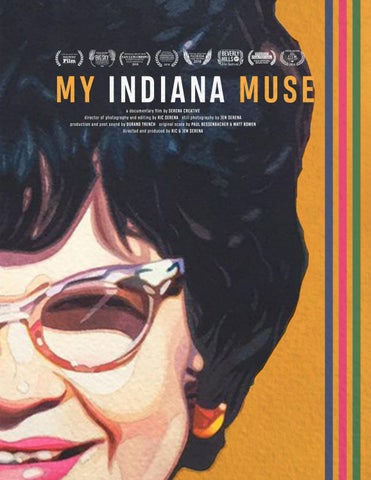 Through an unconventional sequence of events, artist Robert Townsend discovers his muse and embarks on an ambitious and emotional project that will take more than a decade to complete.

For more than twenty years, artist Robert Townsend has given new life to the Americana landscapes. From matchbooks and candy wrappers, to buildings and automobiles, he returns the viewer to another place and time. And now, he has discovered a new muse: Helen. When each image takes months to paint, what could be so powerful about this one woman that inspires Robert to spend the next ten years of his life devoted to painting just her? The art is given new life as Robert dives deeper into Helen’s… visiting places she’s been and meeting people from her life. We discover why he identifies with and become charmed by this woman. Helen is our aunt, our neighbor, the woman at the grocery store, and we reveal that the precious lives that we each lead should be cherished as Robert does, with this woman he’s only beginning to know. From finding the first slide to gallery exhibitions, we explore the painter’s process and the impact of this one woman in so many lives. a film by Serena Creative

A momentâ&#x20AC;&#x2122;s pause between painting sessions

Silverton - another location in Helenâ&#x20AC;&#x2122;s collection of slides

My work is often described as being about mid-century Americana, about a time before my time, and also about a detail-oriented style of painting. I will agree with all of those descriptions. I have always been in love with the look, sound, and style of post-war America, with the clothes, cars, buildings, furniture, product designs, and music of that almost mythical moment. If I had to describe my own work, however, I would have to say that it is really about daydreaming and inspiration. We are all inspired by different things, and each of has our own little dreams. My own dreams just happen to be about the 1950’s and 60’s, and its the dreaming that makes me want to paint every day. It took me a while to figure out just how lucky I was to grow up in a a suburb of Los Angeles, (a hub of mid-century style,) and how significant an affect it had on me, and on my work. My family also travelled the southwest extensively and consistently, a habit that has carried on throughout my life, and those trips never ceased to deliver new discoveries and wonders. The American road seems to have gained celebrity status, as it has dazzled travelers for generations, from horseback and covered wagons, to a ‘59 Impala and beyond. The gas stations and motels, roadside dinosaurs, national parks, saguaros, barns, cows and abandoned buildings give us all a show anytime we can break away. There is an amazing beauty in getting to “create”, in expressing in what we call art. It’s been one of the great honors of my life to get to make any painting at all, let alone all the years of chasing down my own dreams on every canvas, and getting to share those dreams with other people. I now find myself in rural Arizona, surrounded by jackrabbits and ocotillos, and I’m chasing down my dreams of old cars and vintage neon, matchbooks and candies, and my newest loves, “Helen and Roy”.

As partners in Serena Creative and The Muir Project, husband and wife team Ric and Jen Serena have a history of documentary success stories, like Mile... Mile & A Half (premiered in top 10 itunes doc where it remained for 7 weeks, distributed on Netflix, Starz and National Geographic Channel), Ahr-tuh-zen Project: Dave Lefner (festival premiere, aired on PBS and a Vimeo Staff Pick), Noatak: Return to the Arctic (premiered and toured festival circuit,) and Czappa (festival premiere, featured on National Geographic site and a Vimeo Staff Pick) to name a few. As Co-Directors/Producers of the upcoming My Indiana Muse, they bring to light another touching story, relishing in what connects us to others and makes each life special.

Award-Winning Director/Editor, Ric Serena, has garnered considerable praise for his work in narrative, commercial and promotions genres for film and television. His nearly twenty years of post-production experience has made for a seamless transition to directing music videos, commercials, narratives and documentaries.

With a background in events and fundraising for nonprofits, internationally published photographer, Jen Serena, understands the power of a good story, the importance of a wellkept (but flexible) timeline, and how to make an impact on a streamlined budget. Specializing in commercial concept-based photography, portraits for creative professionals and talent, she brings a cinematic style to her imagery that comes alive with a detailed backstory.

Paul Bessenbacher is a composer, creative director and partner for awardwinning music company, Emoto Music, based in Santa Monica. He is also the principal songwriter and lead vocalist for the band, Opus Orange. PB collaborated with Bernard Chadwick to compose the soundtrack for the critically acclaimed film, Mile...Mile & A Half. He has also lended his composition talent to the award winning documentary, Eugene. As a composer and producer, he has collaborated with such artists as Tim Booth (James), Miranda Lee Richards, Joe Gil, Thao (Thao & The Get Down Stay Down), and Eleni Mandell.

Matt teamed up with record producer Matt Wallace (Maroon 5, Faith No More) and worked as an engineer on numerous albums, including Michael Franti & Spearhead's All Rebel Rockers, and O.A.R.'s All Sides...both of which had singles that were RIAA certified platinum. Meanwhile, Matt's composing career quickly picked up steam as he began contributing music to various TV shows, movies, and commercials. While he still enjoys working on albums and writing string arrangements for artists, he is now fully entrenched and very much in love with where his journeys have taken him: creating music for picture. Matt currently composes music for TV, film, and commercials in his custom built studio in Culver City, and can proudly call himself an RIAA Platinum Award and ASCAP Film and Television Award winner.

Durand Trench is a location sound mixer and sound editor who has spent the last 12 years living and working in the Los Angeles area. His work in the sound world has spanned the globe ranging from documenting Malaria net distribution in the Central African Republic to recording foley on glaciers at the base of Mount Baker. Through the passion he brings to his work, Durand hopes to raise peopleâ&#x20AC;&#x2122;s awareness and understanding of the importance of this unseen medium.

Bob has become one of the most prominent short form colorists in his field having colored hundreds of music videos for artists Beyonce, Lady Gaga, My Chemical Romance, All American Rejects, Weezer and Kid Rock, just to name a few. His commercial work includes spots for Honda, Target, Ford, Sprint, Kia, Volkswagen, JC Penny, Budweiser, Yahoo and Reebok. In 2008, Robert Curreri returned to R!ot and then went on to CO3 Santa Monica before going out on his own to pursue feature film digital intermediates (his credits can be viewed on IMDB).