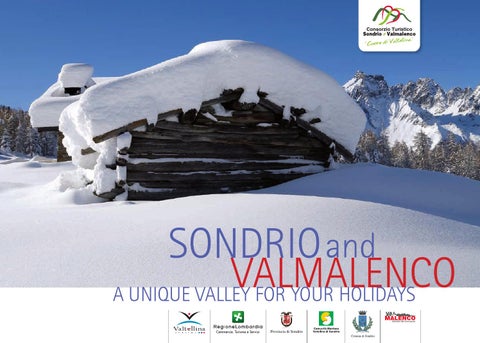 SONDRIO and VALMALENCO A UNIQUE VALLEY FOR YOUR HOLIDAYS

A UNIQUE VALLEY FOR YOUR HOLIDAYS

From the river Adda to 4000 m of Bernina Peak Thank to its morphology and its geographical position, the valley around Sondrio offers a huge range of views where human activities and ecosystem are perfectly mixed. From cultivated fodder plants that serve as frame to the river Adda, from the appleorchards in orderly rows on the cones of the valley bottom You climb up to the castings of the glaciers and to the rocks of the uncontaminated crests. In the middle, the rich variety of diversified vegetable environments

according to the altitude and the exposure. To the left for those travelling from Lake Como, the sunny rhaetic slope, where ancient terraces supported by characteristic drystone walls get back on top to 700 metres: 25 miles of vineyards now clung on rocky crags to exploit even the smallest indentations now lying on the more docile slope in relaxing parallel sequences of terracing, testimony of stubborn willingness of peasant. In front, facing north, the shaded side orobico characterized by thick mantle of chestnut trees that for centuries have accompanied the lives of villagers, ensuring their sustenance

and raw material for the processing of the grapes. Further up the dark band of fir-woods, refuge of a rich wildlife, gradually fading in vast stretches of alpine meadows and nival amphitheatres.

TRADITIONS AND ANCIENT TYPICAL TASTES At the Centre of Valtellina, wedged between the Rhaetic Alps and the Orobiche, lies the city of Sondrio. Strolling through the city, between small antique shops and traditional object, the view is lost confused, while the palate is inevitably whetted by the typical products that only the Valtellina can give. A small city, but with an indefinable charm, the result of a perfect union between buildings of different periods and styles. From the heart of nineteenth &quot;Piazza Garibaldi&quot; with small steps between discrete and full of charm lanes, you can visit beautiful stately homes such as

&quot;Palazzo Sertoli&quot; with the beautiful frescoed saloon or &quot;Palazzo Martinengo&quot; built in the 16th century and the historical library of &quot;Villa Quadrio&quot; easely reaching squares such as Piazza Quadrivio. Among flowers, rocks and vineyards, one on the east and one on the west side of Sondrio, rise the Sanctuary o Madonna della Sassella and Grumello Castle.

OF EMBRACING A PURE LANDSCAPE

There it is! The snow is an important and characteristic element of the landscape and recreation of our mountains. The Pal첫 - San Giuseppe - Caspoggio district is a ski area able to satisfy all needs. Served by the biggest cableway in Europe and several modern chair lifts, spreads out to about fifty kilometers of perfectly groomed slopes by snow-making facilities. In addition to this, the slopes for cross-country skiing of San Giuseppe and Alpe Pal첫 wind through beautiful pine forests and wide open spaces allowing cross-country skiing in all its variations.

An efficient ski school provides assistance in all specialties of nordic and downhill skiing, including &quot;Telemark&quot;. And then the ski touring. Who prefers skiing with seal skins and free spaces of off-piste skiing can count on dozens of routes, ranging from tourism and large bumps on the pastures, to climbing at the highest altitudes of glaciers and peaks.

Over forty miles of ski slopes of Alpe Pal첫 and Caspoggio are the business card of Valmalenco. Those who want to get to Alpe Pal첫 can use directly the modern Snow Eagle, the largest cableway in the world, with its cars for 160 people that will bring, in one leap, at a height of 2080 meters on a terrace that dominates the Alps, with a breathtaking view. Those who prefer a more gradual approach can climb the five kilometers of road that separates Chiesa Valmalenco from San Giuseppe; hence a new chairlift will lead you to Alpe Pal첫 in few minutes, through beautiful pine forests.

On the other side of Alpe Pal첫 you find Caspoggio, with slopes for beginners and families, but also with technical race tracks for racing and training at all levels. And the snow? Do not worry, the snow is at home in Valmalenco, from December to April is always abundant and powdery, and if by chance the snow strays its way home, the most modern snow-making facilities are ready to intervene to create the excellent background that the skiers like. Who would abandon the skis for a moment can relax in the sun in lounge chairs or enjoy the typical dishes of Valmalenco in shelters along the tracks, while the children will find a playground in the snow.

50 ski instructors and coaches with skills for cross-country skiing, telemark, snowboarding. A high level of professionalism for individual or group lessons and agonisitic workshops

Say Valmalenco and think touring is one thing. Yes, because there is no corner of the valley that can not be the scene of some beautiful climbing: climbing on ice, on mixed and on rock. Easy climbing along the normal routes plotted over one hundred years ago and difficult climbing repeated a few times only. All in a high mountain environment that can satisfy the thirst for adventure, nature, physical and spiritual freedom. The names of places are consecrated by years of mountaineering literature: the Torreggio Valley with Corni Bruciati, the glacier of

Ventina, the Sissone Valley with the north wall of Disgrazia, the glaciers of Scerscen and Fellaria dominated by peaks Roseg, Bernina, Argent, ZupĂ˛ and PalĂš. At its eastern edge the Pizzo Scalino with its pyramidal feature. Fifteen shelters and several equipped bivouacs, expertly deployed in the valley at different heights, allowing to perform this fascinating activity in safety. Quality mountaineering even on Orobie. Here the spaces are smaller, but the group Redorta, Scais and Coca in Arigna Valley certainly offers emotionally opportunities for climbing.

The Mountain Guides of Valmalenco offer different courses to satisfy the curiosity and for technical upgrading. From climbing courses, progression of the rope on the ridge, for technical guidance with GPS, compass, altimeter and map to the health in the mountains. And for winter .... courses in Alpine skiing, freeriding, ice climbing. The proposal is a proper training both in technical and cultural knowledge of the alpine environment in its various facets.

A PARADISE FOR HIKING

Walking into the immaculate atmosphere of the alpine pastures. Retracing the paths leading to the historical passes. Tracing trails reaching high altitude passes, from which you can admire the scenery of glaciers. Or lingering on morainic slopes, and between the rocky gorges armed with camera to capture images of a very rich spontaneous flora or reconnoitering spaces released by glaciers in search of minerals. But also making long promenades in fir-woods searching for mushrooms and visiting the ancient settlements and places of human activity to read the life of an Alpine community.

There are over 100 excursions that can be made in Valmalenco. The dense network of mule tracks and trails covering the Valley, from settlements, through forests, up to the Alpine meadows at a very high altitude, can be chosen according to many combinations. There is something for all needs and for all ages. since the return takes place on trails from the round. The morphology of the territory also allows panoramic circular tours which are the most recommended and rewarding, because they propose new scenarios ever since the return is on different paths than the going.

The Alta Via The Alta Via of Valmalenco, thanks to the variety of its environments, is one of the most beautiful highaltitude trails of the Alpine arc: the richness of spontaneous flora, the presence of ancient stonepits, the huts of meadows, the shepherdsâ&amp;#x20AC;&amp;#x2122; constructions and the panoramic views make it unique in its kind. The Alta Via stretches over 110 Km, between 800 and 3000 meters, through woods and high pastures, penetrating lateral valleys, bypassing unforgiving crossing points and then carving in front of the glacier flows of Monte Disgrazia, Pizzo Bernina and Pizzo Scalino. Articulated into eight daily stages, thus linked among them about fifteen refuges. The entire route takes place on well-marked trails.

Thanks to the numerous trails recently set out and the wide mule tracks, the Valmalenco is also suitable for all mountain bike lovers. The uphill stretches can be strenuous to varying degrees, depending on where you set off. The classic climbs connect Chiesa in Valmalenco to Chiareggio, via Primolo and San Giuseppe, by the road used in winter for cross country. From Chiareggio you can reach the Alpe Ventina or Alpe dellâ&amp;#x20AC;&amp;#x2122;Oro, as far as the Muretto Pass, the Italian-Swiss mountain border post. The basin of the Alpe di Campagneda is extremely panoramic and suitable also for anyone on their first time out.

Other destinations, for fitter legs, are Lake PalĂš and the Motta summit or the former Scerscen refuge, along the mule track that rises next to the Longoni refuge. Finally, the areas of Arcoglio and Alpe Musella are very popular and can be reached along the valley bed, for the better bikers, or also by getting a little bit closer by car. A well signposted trail allows visitors to follow the entire valley bed next to the Adda. This is the Sentiero Valtellina, a level route suitable for all.

THE TASTY TRADITIONS OF OUR PEOPLE

Environmental tourism, food and wine, winning combination. Is there anything better, after spending a day in the mountains, than sit at the table in front of a tasty dish and a glass of wine? In the territory of Sondrio it is possible. And it is possible to find the flavours of this land in some specialties, such as pizzoccheri, sciatt and polenta taragna, which have passed the test of time and give joy to the tables of farms with genuine and tasty products of Valtellina tradition. And so tasty delicatessen including the

queen bresaola and the trencher with cheese: the Casera, the ricotta, the stracchini and especially the prestigious and titled Bitto, pride of the provincial dairy production. And here is the tray of sweets: buckwheat cakes, tarts with berries, the bisciola and the cupeta, prepared with nuts and honey. By the way! Have you ever tasted the honey of rhododendron, so delicate and transparent? And finally the basket of fruit, the apples, which are the primacy of agriculture in Valtellina.

Not only traditional dishes, though. The chefs of the restaurants have been able to revisit some recipes of the poor cuisine of Valtellina, expertly adapting them to the new tastes and modern diets, or even have created new recipes using and appreciating the simple ingredients of this land. And then the wines. They do not need presentations: full-bodied wine, dry, fruity, with persistent flavours that harmonize with the local dishes.

PARK OF OROBIE VALTELLINESI: WHERE NATURE PERFORMS ITSELF

The Orobie Alps is the mountain chain that marks the border between the province of Sondrio and the province of Bergamo. It covers about 50 km in a series of summits culminating in the 3052 m of Pizzo Coca. This territory is characterized by an integrated and wild environment and for this reason it was placed under guardianship and protected, which brought to the creation of the Park of the Orobie Valtellinesi. At lower altitudes, the vegetation is rich in forests of broadleaves, followed by spruces and by the alpine meadows rich in the typical flora.

Significant the presence of alpine fauna, with good populations of chamois, deer, roe deer, and ibex, recently reintroduced. Also substantial are the populations of grouse and raptors. This mountainous area offers hiking opportunities at various levels of difficulty, from simple walks up to real challenging tours for experienced mountaineers, climbers and for enthusiasts of mountain biking.

A unique valley for your holiday Inglese 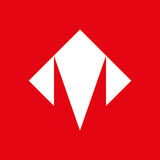