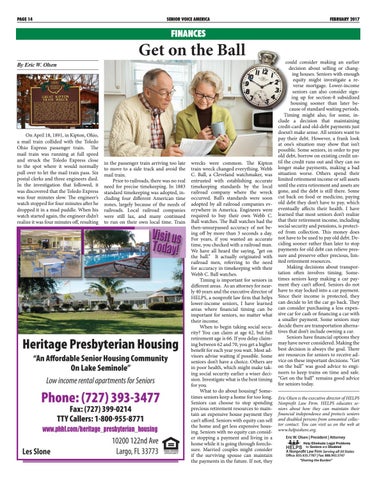 Get on the Ball

in the passenger train arriving too late to move to a side track and avoid the mail train. Prior to railroads, there was no real need for precise timekeeping. In 1883 standard timekeeping was adopted, including four different American time zones, largely because of the needs of railroads. Local railroad companies were still lax, and many continued to run on their own local time. Train

wrecks were common. The Kipton train wreck changed everything. Webb C. Ball, a Cleveland watchmaker, was entrusted with establishing accurate timekeeping standards by the local railroad company where the wreck occurred. Ball’s standards were soon adopted by all railroad companies everywhere in America. Engineers were required to buy their own Webb C. Ball watches. The Ball watches had the then-unsurpassed accuracy of not being off by more than 3 seconds a day. For years, if you wanted an accurate time, you checked with a railroad man. We have all heard the saying, “get on the ball.” It actually originated with railroad men, referring to the need for accuracy in timekeeping with their Webb C. Ball watches. Timing is important for seniors in different areas. As an attorney for nearly 40 years and the executive director of HELPS, a nonprofit law firm that helps lower-income seniors, I have learned areas where financial timing can be important for seniors, no matter what their income. When to begin taking social security? You can claim at age 62, but full retirement age is 66. If you delay claiming between 62 and 70, you get a higher benefit for each year you wait. Most advisors advise waiting if possible. Some seniors don’t have a choice. Others are in poor health, which might make taking social security earlier a wiser decision. Investigate what is the best timing for you. What to do about housing? Sometimes seniors keep a home for too long. Seniors can choose to stop spending precious retirement resources to maintain an expensive house payment they can’t afford. Seniors with equity can sell the home and get less expensive housing. Seniors with no equity can consider stopping a payment and living in a home while it is going through foreclosure. Married couples might consider if the surviving spouse can maintain the payments in the future. If not, they

could consider making an earlier decision about selling or changing houses. Seniors with enough equity might investigate a reverse mortgage. Lower-income seniors can also consider signing up for section-8 subsidized housing sooner than later because of standard waiting periods. Timing might also, for some, include a decision that maintaining credit-card and old-debt payments just doesn’t make sense. All seniors want to pay their debt. However, a frank look at one’s situation may show that isn’t possible. Some seniors, in order to pay old debt, borrow on existing credit until the credit runs out and they can no longer make payments, making a bad situation worse. Others spend their limited retirement income or sell assets until the extra retirement and assets are gone, and the debt is still there. Some cut back on food or medicine, paying old debt they don’t have to pay, which eventually affects their health. I have learned that most seniors don’t realize that their retirement income, including social security and pensions, is protected from collection. This money does not have to be used to pay old debt. Deciding sooner rather than later to stop payments for old debt can relieve pressure and preserve other precious, limited retirement resources. Making decisions about transportation often involves timing. Sometimes seniors keep making a car payment they can’t afford. Seniors do not have to stay locked into a car payment. Since their income is protected, they can decide to let the car go back. They can consider purchasing a less expensive car for cash or financing a car with a smaller payment. Some seniors may decide there are transportation alternatives that don’t include owning a car. Seniors have financial options they may have never considered. Making the best decision is always the goal. There are resources for seniors to receive advice on these important decisions. “Get on the ball” was good advice to engineers to keep trains on time and safe. “Get on the ball” remains good advice for seniors today. Eric Olsen is the executive director of HELPS Nonprofit Law Firm. HELPS educates seniors about how they can maintain their financial independence and protects seniors and disabled persons from unwanted collector contact. You can visit us on the web at www.helpsishere.org. Eric W. Olsen | President | Attorney Help Eliminate Legal Problems for Seniors and Disabled 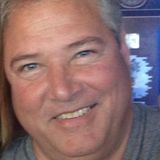