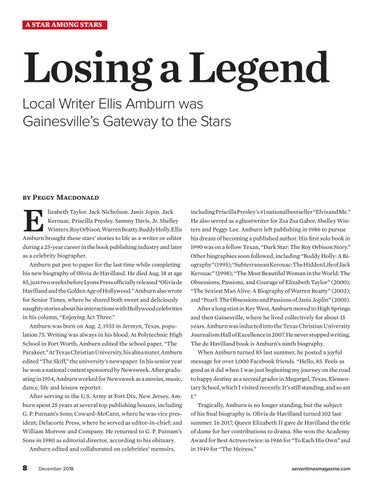 A STAR AMONG STARS

lizabeth Taylor. Jack Nicholson. Janis Jopin. Jack Kerouac. Priscilla Presley. Sammy Davis, Jr. Shelley Winters. Roy Orbison. Warren Beatty. Buddy Holly. Ellis Amburn brought these stars’ stories to life as a writer or editor during a 25-year career in the book publishing industry and later as a celebrity biographer. Amburn put pen to paper for the last time while completing his new biography of Olivia de Havilland. He died Aug. 18 at age 85, just two weeks before Lyons Press ofﬁcially released “Olivia de Havilland and the Golden Age of Hollywood.” Amburn also wrote for Senior Times, where he shared both sweet and deliciously naughty stories about his interactions with Hollywood celebrities in his column, “Enjoying Act Three.” Amburn was born on Aug. 2, 1933 in Jermyn, Texas, population 75. Writing was always in his blood. At Polytechnic High School in Fort Worth, Amburn edited the school paper, “The Parakeet.” At Texas Christian University, his alma mater, Amburn edited “The Skiff,” the university’s newspaper. In his senior year he won a national contest sponsored by Newsweek. After graduating in 1954, Amburn worked for Newsweek as a movies, music, dance, life and leisure reporter. After serving in the U.S. Army at Fort Dix, New Jersey, Amburn spent 25 years at several top publishing houses, including G. P. Putnam’s Sons; Coward-McCann, where he was vice president; Delacorte Press, where he served as editor-in-chief; and William Morrow and Company. He returned to G. P. Putnam’s Sons in 1980 as editorial director, according to his obituary. Amburn edited and collaborated on celebrities’ memoirs,

including Priscilla Presley’s #1 national best seller “Elvis and Me.” He also served as a ghostwriter for Zsa Zsa Gabor, Shelley Winters and Peggy Lee. Amburn left publishing in 1986 to pursue his dream of becoming a published author. His ﬁrst solo book in 1990 was on a fellow Texan, “Dark Star: The Roy Orbison Story.” Other biographies soon followed, including “Buddy Holly: A Biography” (1995); “Subterranean Kerouac: The Hidden Life of Jack Kerouac” (1998); “The Most Beautiful Woman in the World: The Obsessions, Passions, and Courage of Elizabeth Taylor” (2000); “The Sexiest Man Alive: A Biography of Warren Beatty” (2002); and “Pearl: The Obsessions and Passions of Janis Joplin” (2005). After a long stint in Key West, Amburn moved to High Springs and then Gainesville, where he lived collectively for about 15 years. Amburn was inducted into the Texas Christian University Journalism Hall of Excellence in 2007. He never stopped writing. The de Havilland book is Amburn’s ninth biography. When Amburn turned 85 last summer, he posted a joyful message for over 1,000 Facebook friends. “Hello, 85. Feels as good as it did when I was just beginning my journey on the road to happy destiny as a second grader in Megargel, Texas, Elementary School, which I visited recently. It’s still standing, and so am I.” Tragically, Amburn is no longer standing, but the subject of his ﬁnal biography is. Olivia de Havilland turned 102 last summer. In 2017, Queen Elizabeth II gave de Havilland the title of dame for her contributions to drama. She won the Academy Award for Best Actress twice: in 1946 for “To Each His Own” and in 1949 for “The Heiress.” seniortimesmagazine.com

History of the Season

History of the Season