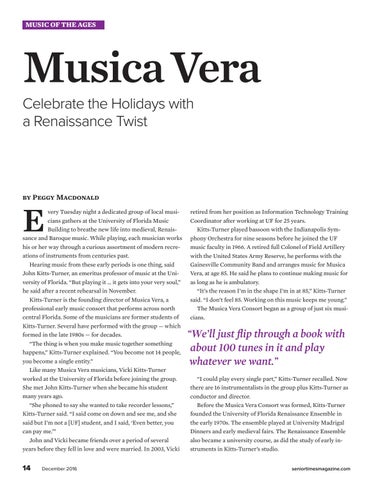 MUSIC OF THE AGES

Musica Vera Celebrate the Holidays with a Renaissance Twist

very Tuesday night a dedicated group of local musicians gathers at the University of Florida Music Building to breathe new life into medieval, Renaissance and Baroque music. While playing, each musician works his or her way through a curious assortment of modern recreations of instruments from centuries past. Hearing music from these early periods is one thing, said John Kitts-Turner, an emeritus professor of music at the University of Florida. “But playing it … it gets into your very soul,” he said after a recent rehearsal in November. Kitts-Turner is the founding director of Musica Vera, a professional early music consort that performs across north central Florida. Some of the musicians are former students of Kitts-Turner. Several have performed with the group — which formed in the late 1980s — for decades. “The thing is when you make music together something happens,” Kitts-Turner explained. “You become not 14 people, you become a single entity.” Like many Musica Vera musicians, Vicki Kitts-Turner worked at the University of Florida before joining the group. She met John Kitts-Turner when she became his student many years ago. “She phoned to say she wanted to take recorder lessons,” Kitts-Turner said. “I said come on down and see me, and she said but I’m not a [UF] student, and I said, ‘Even better, you can pay me.’” John and Vicki became friends over a period of several years before they fell in love and were married. In 2003, Vicki

retired from her position as Information Technology Training Coordinator after working at UF for 25 years. Kitts-Turner played bassoon with the Indianapolis Symphony Orchestra for nine seasons before he joined the UF music faculty in 1966. A retired full Colonel of Field Artillery with the United States Army Reserve, he performs with the Gainesville Community Band and arranges music for Musica Vera, at age 85. He said he plans to continue making music for as long as he is ambulatory. “It’s the reason I’m in the shape I’m in at 85,” Kitts-Turner said. “I don’t feel 85. Working on this music keeps me young.” The Musica Vera Consort began as a group of just six musicians.

“We’ll just ﬂip through a book with about 100 tunes in it and play whatever we want.” “I could play every single part,” Kitts-Turner recalled. Now there are 16 instrumentalists in the group plus Kitts-Turner as conductor and director. Before the Musica Vera Consort was formed, Kitts-Turner founded the University of Florida Renaissance Ensemble in the early 1970s. The ensemble played at University Madrigal Dinners and early medieval fairs. The Renaissance Ensemble also became a university course, as did the study of early instruments in Kitts-Turner’s studio. seniortimesmagazine.com