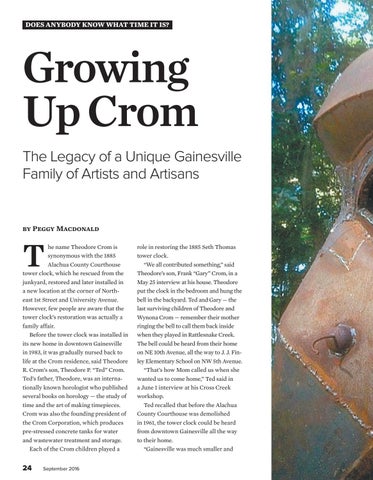 DOES ANYBODY KNOW WHAT TIME IT IS?

he name Theodore Crom is synonymous with the 1885 Alachua County Courthouse tower clock, which he rescued from the junkyard, restored and later installed in a new location at the corner of Northeast 1st Street and University Avenue. However, few people are aware that the tower clock’s restoration was actually a family affair. Before the tower clock was installed in its new home in downtown Gainesville in 1983, it was gradually nursed back to life at the Crom residence, said Theodore R. Crom’s son, Theodore P. “Ted” Crom. Ted’s father, Theodore, was an internationally known horologist who published several books on horology — the study of time and the art of making timepieces. Crom was also the founding president of the Crom Corporation, which produces pre-stressed concrete tanks for water and wastewater treatment and storage. Each of the Crom children played a

role in restoring the 1885 Seth Thomas tower clock. “We all contributed something,” said Theodore’s son, Frank “Gary” Crom, in a May 25 interview at his house. Theodore put the clock in the bedroom and hung the bell in the backyard. Ted and Gary — the last surviving children of Theodore and Wynona Crom — remember their mother ringing the bell to call them back inside when they played in Rattlesnake Creek. The bell could be heard from their home on NE 10th Avenue, all the way to J. J. Finley Elementary School on NW 5th Avenue. “That’s how Mom called us when she wanted us to come home,” Ted said in a June 1 interview at his Cross Creek workshop. Ted recalled that before the Alachua County Courthouse was demolished in 1961, the tower clock could be heard from downtown Gainesville all the way to their home. “Gainesville was much smaller and seniortimesmagazine.com

Portal to the Past

Portal to the Past