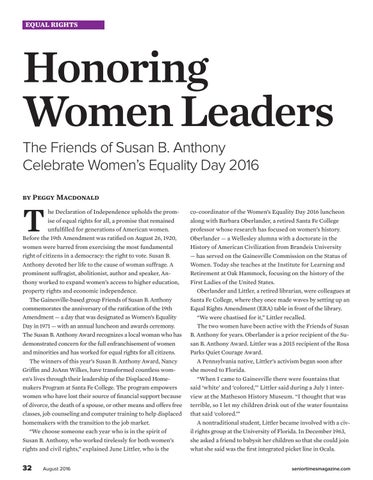 he Declaration of Independence upholds the promise of equal rights for all, a promise that remained unfulﬁlled for generations of American women. Before the 19th Amendment was ratiﬁed on August 26, 1920, women were barred from exercising the most fundamental right of citizens in a democracy: the right to vote. Susan B. Anthony devoted her life to the cause of woman suffrage. A prominent suffragist, abolitionist, author and speaker, Anthony worked to expand women’s access to higher education, property rights and economic independence. The Gainesville-based group Friends of Susan B. Anthony commemorates the anniversary of the ratiﬁcation of the 19th Amendment — a day that was designated as Women’s Equality Day in 1971 — with an annual luncheon and awards ceremony. The Susan B. Anthony Award recognizes a local woman who has demonstrated concern for the full enfranchisement of women and minorities and has worked for equal rights for all citizens. The winners of this year’s Susan B. Anthony Award, Nancy Grifﬁn and JoAnn Wilkes, have transformed countless women’s lives through their leadership of the Displaced Homemakers Program at Santa Fe College. The program empowers women who have lost their source of ﬁnancial support because of divorce, the death of a spouse, or other means and offers free classes, job counseling and computer training to help displaced homemakers with the transition to the job market. “We choose someone each year who is in the spirit of Susan B. Anthony, who worked tirelessly for both women’s rights and civil rights,” explained June Littler, who is the

co-coordinator of the Women’s Equality Day 2016 luncheon along with Barbara Oberlander, a retired Santa Fe College professor whose research has focused on women’s history. Oberlander — a Wellesley alumna with a doctorate in the History of American Civilization from Brandeis University — has served on the Gainesville Commission on the Status of Women. Today she teaches at the Institute for Learning and Retirement at Oak Hammock, focusing on the history of the First Ladies of the United States. Oberlander and Littler, a retired librarian, were colleagues at Santa Fe College, where they once made waves by setting up an Equal Rights Amendment (ERA) table in front of the library. “We were chastised for it,” Littler recalled. The two women have been active with the Friends of Susan B. Anthony for years. Oberlander is a prior recipient of the Susan B. Anthony Award. Littler was a 2015 recipient of the Rosa Parks Quiet Courage Award. A Pennsylvania native, Littler’s activism began soon after she moved to Florida. “When I came to Gainesville there were fountains that said ‘white’ and ‘colored,’” Littler said during a July 1 interview at the Matheson History Museum. “I thought that was terrible, so I let my children drink out of the water fountains that said ‘colored.’” A nontraditional student, Littler became involved with a civil rights group at the University of Florida. In December 1963, she asked a friend to babysit her children so that she could join what she said was the ﬁrst integrated picket line in Ocala. seniortimesmagazine.com