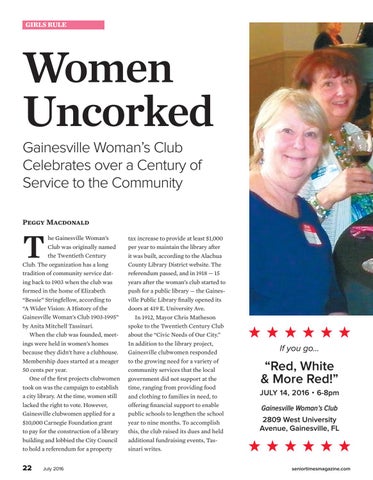 he Gainesville Woman’s Club was originally named the Twentieth Century Club. The organization has a long tradition of community service dating back to 1903 when the club was formed in the home of Elizabeth “Bessie” Stringfellow, according to “A Wider Vision: A History of the Gainesville Woman’s Club 1903-1995” by Anita Mitchell Tassinari. When the club was founded, meetings were held in women’s homes because they didn’t have a clubhouse. Membership dues started at a meager 50 cents per year. One of the ﬁrst projects clubwomen took on was the campaign to establish a city library. At the time, women still lacked the right to vote. However, Gainesville clubwomen applied for a $10,000 Carnegie Foundation grant to pay for the construction of a library building and lobbied the City Council to hold a referendum for a property

tax increase to provide at least $1,000 per year to maintain the library after it was built, according to the Alachua County Library District website. The referendum passed, and in 1918 — 15 years after the woman’s club started to push for a public library — the Gainesville Public Library ﬁnally opened its doors at 419 E. University Ave. In 1912, Mayor Chris Matheson spoke to the Twentieth Century Club about the “Civic Needs of Our City.” In addition to the library project, Gainesville clubwomen responded to the growing need for a variety of community services that the local government did not support at the time, ranging from providing food and clothing to families in need, to offering ﬁnancial support to enable public schools to lengthen the school year to nine months. To accomplish this, the club raised its dues and held additional fundraising events, Tassinari writes.