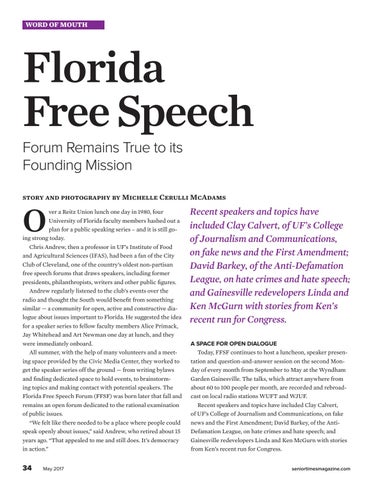 ver a Reitz Union lunch one day in 1980, four University of Florida faculty members hashed out a plan for a public speaking series – and it is still going strong today. Chris Andrew, then a professor in UF’s Institute of Food and Agricultural Sciences (IFAS), had been a fan of the City Club of Cleveland, one of the country’s oldest non-partisan free speech forums that draws speakers, including former presidents, philanthropists, writers and other public ﬁgures. Andrew regularly listened to the club’s events over the radio and thought the South would beneﬁt from something similar — a community for open, active and constructive dialogue about issues important to Florida. He suggested the idea for a speaker series to fellow faculty members Alice Primack, Jay Whitehead and Art Newman one day at lunch, and they were immediately onboard. All summer, with the help of many volunteers and a meeting space provided by the Civic Media Center, they worked to get the speaker series off the ground — from writing bylaws and ﬁnding dedicated space to hold events, to brainstorming topics and making contact with potential speakers. The Florida Free Speech Forum (FFSF) was born later that fall and remains an open forum dedicated to the rational examination of public issues. “We felt like there needed to be a place where people could speak openly about issues,” said Andrew, who retired about 15 years ago. “That appealed to me and still does. It’s democracy in action.”