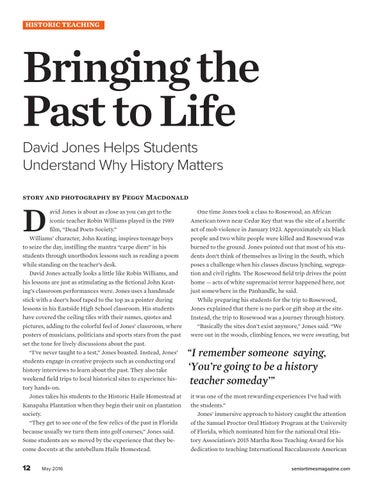 avid Jones is about as close as you can get to the iconic teacher Robin Williams played in the 1989 ﬁlm, “Dead Poets Society.” Williams’ character, John Keating, inspires teenage boys to seize the day, instilling the mantra “carpe diem” in his students through unorthodox lessons such as reading a poem while standing on the teacher’s desk. David Jones actually looks a little like Robin Williams, and his lessons are just as stimulating as the ﬁctional John Keating’s classroom performances were. Jones uses a handmade stick with a deer’s hoof taped to the top as a pointer during lessons in his Eastside High School classroom. His students have covered the ceiling tiles with their names, quotes and pictures, adding to the colorful feel of Jones’ classroom, where posters of musicians, politicians and sports stars from the past set the tone for lively discussions about the past. “I’ve never taught to a test,” Jones boasted. Instead, Jones’ students engage in creative projects such as conducting oral history interviews to learn about the past. They also take weekend ﬁeld trips to local historical sites to experience history hands-on. Jones takes his students to the Historic Haile Homestead at Kanapaha Plantation when they begin their unit on plantation society. “They get to see one of the few relics of the past in Florida because usually we turn them into golf courses,” Jones said. Some students are so moved by the experience that they become docents at the antebellum Haile Homestead.

One time Jones took a class to Rosewood, an African American town near Cedar Key that was the site of a horriﬁc act of mob violence in January 1923. Approximately six black people and two white people were killed and Rosewood was burned to the ground. Jones pointed out that most of his students don’t think of themselves as living in the South, which poses a challenge when his classes discuss lynching, segregation and civil rights. The Rosewood ﬁeld trip drives the point home — acts of white supremacist terror happened here, not just somewhere in the Panhandle, he said. While preparing his students for the trip to Rosewood, Jones explained that there is no park or gift shop at the site. Instead, the trip to Rosewood was a journey through history. “Basically the sites don’t exist anymore,” Jones said. “We were out in the woods, climbing fences, we were sweating, but

“I remember someone saying, ‘You’re going to be a history teacher someday’” it was one of the most rewarding experiences I’ve had with the students.” Jones’ immersive approach to history caught the attention of the Samuel Proctor Oral History Program at the University of Florida, which nominated him for the national Oral History Association’s 2015 Martha Ross Teaching Award for his dedication to teaching International Baccalaureate American seniortimesmagazine.com