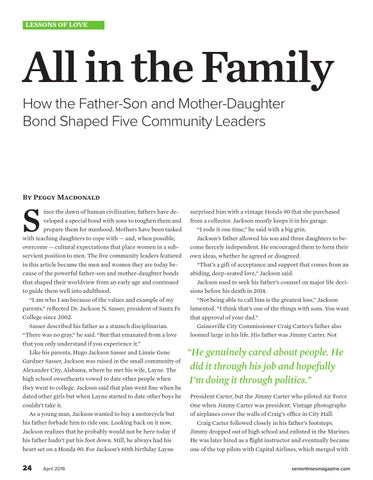 ince the dawn of human civilization, fathers have developed a special bond with sons to toughen them and prepare them for manhood. Mothers have been tasked with teaching daughters to cope with — and, when possible, overcome — cultural expectations that place women in a subservient position to men. The ﬁve community leaders featured in this article became the men and women they are today because of the powerful father-son and mother-daughter bonds that shaped their worldview from an early age and continued to guide them well into adulthood. “I am who I am because of the values and example of my parents,” reﬂected Dr. Jackson N. Sasser, president of Santa Fe College since 2002. Sasser described his father as a staunch disciplinarian. “There was no gray,” he said. “But that emanated from a love that you only understand if you experience it.” Like his parents, Hugo Jackson Sasser and Linnie Gene Gardner Sasser, Jackson was raised in the small community of Alexander City, Alabama, where he met his wife, Layne. The high school sweethearts vowed to date other people when they went to college. Jackson said that plan went ﬁne when he dated other girls but when Layne started to date other boys he couldn’t take it. As a young man, Jackson wanted to buy a motorcycle but his father forbade him to ride one. Looking back on it now, Jackson realizes that he probably would not be here today if his father hadn’t put his foot down. Still, he always had his heart set on a Honda 90. For Jackson’s 60th birthday Layne

surprised him with a vintage Honda 90 that she purchased from a collector. Jackson mostly keeps it in his garage. “I rode it one time,” he said with a big grin. Jackson’s father allowed his son and three daughters to become ﬁercely independent. He encouraged them to form their own ideas, whether he agreed or disagreed. “That’s a gift of acceptance and support that comes from an abiding, deep-seated love,” Jackson said. Jackson used to seek his father’s counsel on major life decisions before his death in 2014. “Not being able to call him is the greatest loss,” Jackson lamented. “I think that’s one of the things with sons. You want that approval of your dad.” Gainesville City Commissioner Craig Carter’s father also loomed large in his life. His father was Jimmy Carter. Not

“He genuinely cared about people. He did it through his job and hopefully I’m doing it through politics.” President Carter, but the Jimmy Carter who piloted Air Force One when Jimmy Carter was president. Vintage photographs of airplanes cover the walls of Craig’s ofﬁce in City Hall. Craig Carter followed closely in his father’s footsteps. Jimmy dropped out of high school and enlisted in the Marines. He was later hired as a ﬂight instructor and eventually became one of the top pilots with Capital Airlines, which merged with seniortimesmagazine.com