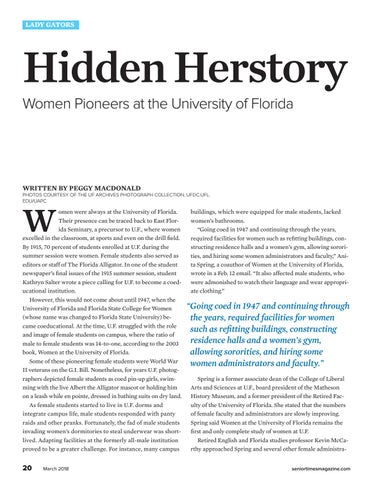 Hidden Herstory Women Pioneers at the University of Florida

omen were always at the University of Florida. Their presence can be traced back to East Florida Seminary, a precursor to U.F., where women excelled in the classroom, at sports and even on the drill ﬁeld. By 1915, 70 percent of students enrolled at U.F. during the summer session were women. Female students also served as editors or staff of The Florida Alligator. In one of the student newspaper’s ﬁnal issues of the 1915 summer session, student Kathryn Salter wrote a piece calling for U.F. to become a coeducational institution. However, this would not come about until 1947, when the University of Florida and Florida State College for Women (whose name was changed to Florida State University) became coeducational. At the time, U.F. struggled with the role and image of female students on campus, where the ratio of male to female students was 14-to-one, according to the 2003 book, Women at the University of Florida. Some of these pioneering female students were World War II veterans on the G.I. Bill. Nonetheless, for years U.F. photographers depicted female students as coed pin-up girls, swimming with the live Albert the Alligator mascot or holding him on a leash while en pointe, dressed in bathing suits on dry land. As female students started to live in U.F. dorms and integrate campus life, male students responded with panty raids and other pranks. Fortunately, the fad of male students invading women’s dormitories to steal underwear was shortlived. Adapting facilities at the formerly all-male institution proved to be a greater challenge. For instance, many campus

buildings, which were equipped for male students, lacked women’s bathrooms. “Going coed in 1947 and continuing through the years, required facilities for women such as reﬁtting buildings, constructing residence halls and a women’s gym, allowing sororities, and hiring some women administrators and faculty,” Anita Spring, a coauthor of Women at the University of Florida, wrote in a Feb. 12 email. “It also affected male students, who were admonished to watch their language and wear appropriate clothing.”

“Going coed in 1947 and continuing through the years, required facilities for women such as reﬁtting buildings, constructing residence halls and a women’s gym, allowing sororities, and hiring some women administrators and faculty.” Spring is a former associate dean of the College of Liberal Arts and Sciences at U.F., board president of the Matheson History Museum, and a former president of the Retired Faculty of the University of Florida. She stated that the numbers of female faculty and administrators are slowly improving. Spring said Women at the University of Florida remains the ﬁrst and only complete study of women at U.F. Retired English and Florida studies professor Kevin McCarthy approached Spring and several other female administraseniortimesmagazine.com

Hidden Herstory - Women Pioneers at the University of Florida