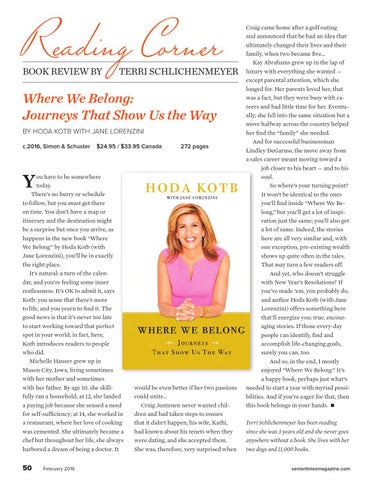 Where We Belong: Journeys That Show Us the Way BY HODA KOTB WITH JANE LORENZINI c.2016, Simon &amp; Schuster

ou have to be somewhere today. There’s no hurry or schedule to follow, but you must get there on time. You don’t have a map or itinerary and the destination might be a surprise but once you arrive, as happens in the new book “Where We Belong” by Hoda Kotb (with Jane Lorenzini), you’ll be in exactly the right place. It’s natural: a turn of the calendar, and you’re feeling some inner restlessness. It’s OK to admit it, says Kotb: you sense that there’s more to life, and you yearn to ﬁnd it. The good news is that it’s never too late to start working toward that perfect spot in your world; in fact, here, Kotb introduces readers to people who did. Michelle Hauser grew up in Mason City, Iowa, living sometimes with her mother and sometimes with her father. By age 10, she skillfully ran a household; at 12, she landed a paying job because she sensed a need for self-sufﬁciency; at 14, she worked in a restaurant, where her love of cooking was cemented. She ultimately became a chef but throughout her life, she always harbored a dream of being a doctor. It

would be even better if her two passions could unite… Craig Juntenen never wanted children and had taken steps to ensure that it didn’t happen; his wife, Kathi, had known about his tenets when they were dating, and she accepted them. She was, therefore, very surprised when

Craig came home after a golf outing and announced that he had an idea that ultimately changed their lives and their family, when two became ﬁve… Kay Abrahams grew up in the lap of luxury with everything she wanted — except parental attention, which she longed for. Her parents loved her, that was a fact, but they were busy with careers and had little time for her. Eventually, she fell into the same situation but a move halfway across the country helped her ﬁnd the “family” she needed. And for successful businessman Lindley DeGarmo, the move away from a sales career meant moving toward a job closer to his heart — and to his soul. So where’s your turning point? It won’t be identical to the ones you’ll ﬁnd inside “Where We Belong,” but you’ll get a lot of inspiration just the same; you’ll also get a lot of same. Indeed, the stories here are all very similar and, with one exception, pre-existing wealth shows up quite often in the tales. That may turn a few readers off. And yet, who doesn’t struggle with New Year’s Resolutions? If you’ve made ‘em, you probably do, and author Hoda Kotb (with Jane Lorenzini) offers something here that’ll energize you: true, encouraging stories. If those every-day people can identify, ﬁnd and accomplish life-changing goals, surely you can, too. And so, in the end, I mostly enjoyed “Where We Belong.” It’s a happy book, perhaps just what’s needed to start a year with myriad possibilities. And if you’re eager for that, then this book belongs in your hands. s Terri Schlichenmeyer has been reading since she was 3 years old and she never goes anywhere without a book. She lives with her two dogs and 11,000 books.