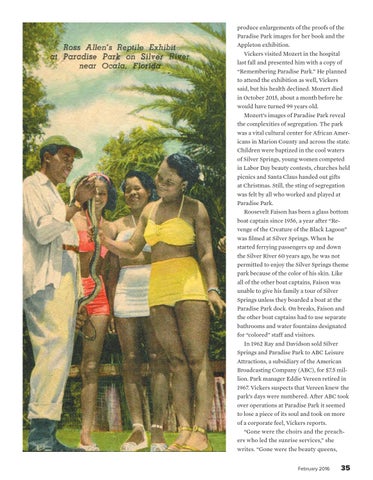 produce enlargements of the proofs of the Paradise Park images for her book and the Appleton exhibition. Vickers visited Mozert in the hospital last fall and presented him with a copy of “Remembering Paradise Park.” He planned to attend the exhibition as well, Vickers said, but his health declined. Mozert died in October 2015, about a month before he would have turned 99 years old. Mozert’s images of Paradise Park reveal the complexities of segregation. The park was a vital cultural center for African Americans in Marion County and across the state. Children were baptized in the cool waters of Silver Springs, young women competed in Labor Day beauty contests, churches held picnics and Santa Claus handed out gifts at Christmas. Still, the sting of segregation was felt by all who worked and played at Paradise Park. Roosevelt Faison has been a glass bottom boat captain since 1956, a year after “Revenge of the Creature of the Black Lagoon” was ﬁlmed at Silver Springs. When he started ferrying passengers up and down the Silver River 60 years ago, he was not permitted to enjoy the Silver Springs theme park because of the color of his skin. Like all of the other boat captains, Faison was unable to give his family a tour of Silver Springs unless they boarded a boat at the Paradise Park dock. On breaks, Faison and the other boat captains had to use separate bathrooms and water fountains designated for “colored” staff and visitors. In 1962 Ray and Davidson sold Silver Springs and Paradise Park to ABC Leisure Attractions, a subsidiary of the American Broadcasting Company (ABC), for $7.5 million. Park manager Eddie Vereen retired in 1967. Vickers suspects that Vereen knew the park’s days were numbered. After ABC took over operations at Paradise Park it seemed to lose a piece of its soul and took on more of a corporate feel, Vickers reports. “Gone were the choirs and the preachers who led the sunrise services,” she writes. “Gone were the beauty queens, February 2016