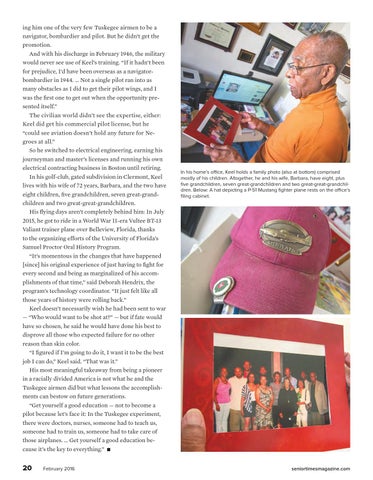 ing him one of the very few Tuskegee airmen to be a navigator, bombardier and pilot. But he didn’t get the promotion. And with his discharge in February 1946, the military would never see use of Keel’s training. “If it hadn’t been for prejudice, I’d have been overseas as a navigatorbombardier in 1944. … Not a single pilot ran into as many obstacles as I did to get their pilot wings, and I was the ﬁrst one to get out when the opportunity presented itself.” The civilian world didn’t see the expertise, either: Keel did get his commercial pilot license, but he “could see aviation doesn’t hold any future for Negroes at all.” So he switched to electrical engineering, earning his journeyman and master’s licenses and running his own electrical contracting business in Boston until retiring. In his golf-club, gated subdivision in Clermont, Keel lives with his wife of 72 years, Barbara, and the two have eight children, ﬁve grandchildren, seven great-grandchildren and two great-great-grandchildren. His ﬂying days aren’t completely behind him: In July 2015, he got to ride in a World War II-era Vultee BT-13 Valiant trainer plane over Belleview, Florida, thanks to the organizing efforts of the University of Florida’s Samuel Proctor Oral History Program. “It’s momentous in the changes that have happened [since] his original experience of just having to ﬁght for every second and being as marginalized of his accomplishments of that time,” said Deborah Hendrix, the program’s technology coordinator. “It just felt like all those years of history were rolling back.” Keel doesn’t necessarily wish he had been sent to war — “Who would want to be shot at?” — but if fate would have so chosen, he said he would have done his best to disprove all those who expected failure for no other reason than skin color. “I ﬁgured if I’m going to do it, I want it to be the best job I can do,” Keel said. “That was it.” His most meaningful takeaway from being a pioneer in a racially divided America is not what he and the Tuskegee airmen did but what lessons the accomplishments can bestow on future generations. “Get yourself a good education — not to become a pilot because let’s face it: In the Tuskegee experiment, there were doctors, nurses, someone had to teach us, someone had to train us, someone had to take care of those airplanes. … Get yourself a good education because it’s the key to everything.” s

In his home’s office, Keel holds a family photo (also at bottom) comprised mostly of his children. Altogether, he and his wife, Barbara, have eight, plus ﬁve grandchildren, seven great-grandchildren and two great-great-grandchildren. Below: A hat depicting a P-51 Mustang ﬁghter plane rests on the office’s ﬁling cabinet.