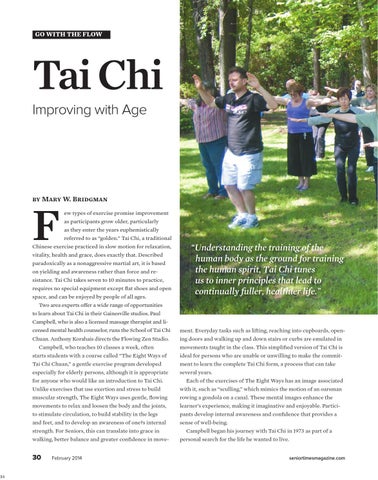 GO WITH THE FLOW

ew types of exercise promise improvement as participants grow older, particularly as they enter the years euphemistically referred to as “golden.” Tai Chi, a traditional Chinese exercise practiced in slow motion for relaxation, vitality, health and grace, does exactly that. Described paradoxically as a nonaggressive martial art, it is based on yielding and awareness rather than force and resistance. Tai Chi takes seven to 10 minutes to practice, requires no special equipment except ﬂat shoes and open space, and can be enjoyed by people of all ages. Two area experts offer a wide range of opportunities to learn about Tai Chi in their Gainesville studios. Paul Campbell, who is also a licensed massage therapist and licensed mental health counselor, runs the School of Tai Chi Chuan. Anthony Korahais directs the Flowing Zen Studio. Campbell, who teaches 10 classes a week, often starts students with a course called “The Eight Ways of Tai Chi Chuan,” a gentle exercise program developed especially for elderly persons, although it is appropriate for anyone who would like an introduction to Tai Chi. Unlike exercises that use exertion and stress to build muscular strength, The Eight Ways uses gentle, ﬂowing movements to relax and loosen the body and the joints, to stimulate circulation, to build stability in the legs and feet, and to develop an awareness of one?s internal strength. For Seniors, this can translate into grace in walking, better balance and greater conﬁdence in move-

“Understanding the training of the human body as the ground for training the human spirit, Tai Chi tunes us to inner principles that lead to continually fuller, healthier life.”

ment. Everyday tasks such as lifting, reaching into cupboards, opening doors and walking up and down stairs or curbs are emulated in movements taught in the class. This simpliﬁed version of Tai Chi is ideal for persons who are unable or unwilling to make the commitment to learn the complete Tai Chi form, a process that can take several years. Each of the exercises of The Eight Ways has an image associated with it, such as “sculling,” which mimics the motion of an oarsman rowing a gondola on a canal. These mental images enhance the learner’s experience, making it imaginative and enjoyable. Participants develop internal awareness and conﬁdence that provides a sense of well-being. Campbell began his journey with Tai Chi in 1973 as part of a personal search for the life he wanted to live. seniortimesmagazine.com