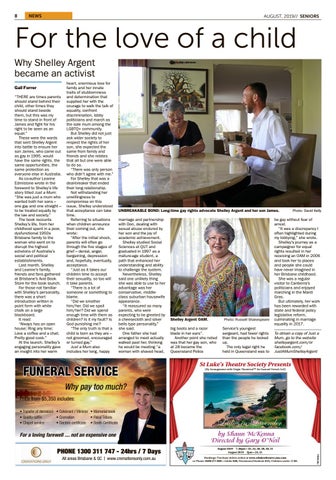 For the love of a child Why Shelley Argent became an activist Gail Forrer “THERE are times parents should stand behind their child, other times they should stand beside them, but this was my time to stand in front of James and fight for his right to be seen as an equal.” These were the words that sent Shelley Argent into battle to ensure her son James, who came out as gay in 1995, would have the same rights, the same opportunities, the same protection as everyone else in Australia. As co-author Leanne Edmistone wrote in the foreword to Shelley’s life story titled Just a Mum: “She was just a mum who wanted both her sons – one gay and one straight – to be treated equally by the law and society.” The book recounts Shelley’s life, from her childhood spent in a poor, dysfunctional 1950s Brisbane family to the woman who went on to disrupt the highest echelons of Australia’s social and political establishments. Last month, Shelley and Leanne’s family, friends and fans gathered at Brisbane’s Avid Book Store for the book launch. For those not familiar with Shelley’s personality, there was a short introduction written in point form with white chalk on a large blackboard. It read: “Always has an open house; Ring any time; Love a coffee and a chat; Pretty good cook.’’ At the launch, Shelley’s engaging personality gave an insight into her warm

heart, enormous love for family and her innate traits of stubbornness and determination that supplied her with the courage to walk the talk of equality, confront discrimination, lobby politicians and march as the sole mum among the LGBTQ+ community. But Shelley did not just ask wider society to respect the rights of her son, she expected the same from family and friends and she relates that all but one were able to do so. “There was only person who didn’t agree with me.” For Shelley that was a deal-breaker that ended their long relationship. Not withstanding her unwillingness to compromise on this issue, Shelley understood that acceptance can take time. Referring to situations when children announce their coming out, she wrote: “After the initial shock, parents will often go through the five stages of grief – denial, anger, bargaining, depression and, hopefully, eventually, acceptance. “Just as it takes our children time to accept their sexuality, so too will it take parents. “There is a lot of someone or something to blame. “Did we smother him/her. Did we spoil him/her? Did we spend enough time with them as children? Is it my fault? Is God punishing me? “The only truth is that a child is born as they are – not groomed, encouraged or turned gay.” Just a Mum also includes her long, happy

UNBREAKABLE BOND: Long-time gay rights advocate Shelley Argent and her son James. marriage and partnership with Don, dealing with sexual abuse endured by her son and the joy of academic achievement. Shelley studied Social Sciences at QUT and graduated in 1997 as a mature-age student, a path that enhanced her understanding and ability to challenge the system. Nevertheless, Shelley said one unlikely thing she was able to use to her advantage was her conservative, middleclass suburban housewife appearance. “It reassured so many parents, who were expecting to be greeted by a cheesecloth and silver bells type personality,’’ she said. One father she had arranged to meet actually walked past her, thinking he would be meeting “a woman with shaved head,

big boots and a razor blade in her ears”. Another point she noted was that her gay son, who at 28 became the Queensland Police

Service’s youngest sergeant, had fewer rights than the people he locked up. The only legal right he held in Queensland was to

be gay without fear of arrest. “It was a discrepancy I often highlighted during my lobbying,” she wrote. Shelley’s journey as a campaigner for equal rights resulted in her receiving an OAM in 2006 and took her to places and people she could have never imagined in her Brisbane childhood. She was a regular visitor to Canberra’s politicians and enjoyed marching in the Mardi Gras. But ultimately, her work has been rewarded with state and federal policy legislative reform, culminating in marriage equality in 2017. To obtain a copy of Just a Mum, go to the website shelleyargent.com/or facebook.com/ JustAMumShelleyArgent

(By Arrangement with Origin TheatricalTm. for Samuel French Ltd)

For a loving farewell .... not an expensive one