The Impact of Arbitration Agreements on Senior Living, 2 of 2 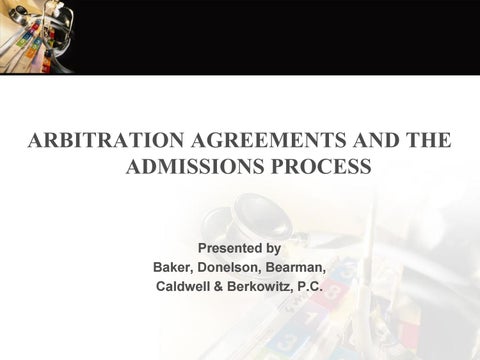 ARBITRATION AGREEMENTS AND THE ADMISSIONS PROCESS

What are the roles of the Admissions Coordinator and why are you so important to this process?

Role of Admissions Staff In many situations, 1) You are the first interaction that a family has with the community. 2) You set the stage of how the family is going to see the community for the first time. 3) Courts and judges look to you to see how you presented the Arbitration Agreement.

Quiz Give some serious thought and consideration to the questions and answer them as simply as you can.

What is Arbitration? It is an alternative to a jury trial where the parties to a dispute agree to submit their dispute to a neutral third party (the arbitrator) for resolution.

Setting a Hearing Date The parties and arbitrator choose a mutually convenient day and time for the hearing.

Presentation of the Case • What happens during the arbitration? • Do you have witnesses? • How long does it take?

Presentation of the Case Arbitration hearings are conducted somewhat like court trials, except that arbitrations are less formal. Arbitrators are not required to follow strict rules of evidence.

Presentation of the Case This includes three main things: • An opening statement • Witness testimony and crossexaminations • A closing statement

The Award • How long does the decision and award happen in an Arbitration? – Under your Arbitration Agreement, within 10 days of the conclusion of the hearing. • Is there a right to appeal? – No, not unless there is fraud. • Is the award limited to a certain amount of money? – No.

The Award â&amp;#x20AC;˘ The award is the decision of the arbitrator. The purpose of the award is to dispose of the controversy finally and conclusively.

GOAL 2 -To understand why Arbitration is beneficial to everyone involved.

What are the Benefits of Arbitration?

What are the Benefits of Arbitration? â&amp;#x20AC;˘ Privacy - An arbitration hearing is a private meeting the media and members of the public are not able to attend. The final decision is confidential.

What are the Benefits of Arbitration? â&amp;#x20AC;˘ Informality â&amp;#x20AC;&amp;#x201C; Arbitration is far less formal than at court trial. As a consequence, it helps with good working relationships.

What are the Benefits of Arbitration? â&amp;#x20AC;˘ Efficiency - An arbitration can normally be heard sooner than it takes to get court proceedings heard. Preparation should be less onerous, and the hearing should be shorter. Under your Arbitration Agreement, the goal of the parties is to complete the entire process in 180 days. The process of a jury trial and appeal can take years.

What are the Benefits of Arbitration? â&amp;#x20AC;˘ Finality - There is generally no right of appeal, unless there is fraud.

What are the Benefits of Arbitration? â&amp;#x20AC;˘ Choice of decision maker - For example, the parties can choose a person who understands long-term care as arbitrator, so they will better understand the evidence.

What are the Benefits of Arbitration? • Flexibility – The parties can control the pace, hours, location and many details because they don’t have to stay on a jury/court schedule.

What are the Benefits of Arbitration? â&amp;#x20AC;˘ Convenience - The hearings are arranged at times and places to suit the parties, witnesses, and arbitrator.

Arbitration for NH Client • Both sides agreed on an Arbitrator. • Both sides had the same amount of time to present their case. • Both sides were allowed to call witnesses when it was convenient for the witnesses to appear. • Both sides took breaks when they needed. • It was business casual dress. • The overall costs were cut in half.

Our New Arbitration Agreement Discussion of Each Paragraph

Discussion of the Signature Block

Frequently Asked Questions &amp; Answers â&amp;#x20AC;˘ Q. What is arbitration? Q. Do I have a right to my own attorney? Q. Who are the arbitrators? Q. Who selects the arbitrators? â&amp;#x20AC;˘ A. All of these questions may be answered by responding that arbitration is an alternative form of handling disputes. It only changes the forum in which your dispute will be heard (an arbitrator instead of a jury). You would select your own attorney and the community would select its attorney. The two sides try to agree on one arbitrator. If they cannot, the Court appoints a neutral arbitrator.

Frequently Asked Questions &amp; Answers • Q. Can I still sue the community? • A. Yes. Signing the Arbitration Agreement only changes the forum in which your dispute will be heard (an arbitrator instead of a jury).

Frequently Asked Questions &amp; Answers â&amp;#x20AC;˘ Q. Will the nursing community allow me to be admitted if I do not sign the Arbitration Agreement? â&amp;#x20AC;˘ A. Yes.

Frequently Asked Questions &amp; Answers â&amp;#x20AC;˘ Q. Is arbitration only used by Long Term Care Communities? â&amp;#x20AC;˘ A. No. Arbitration has been utilized since the 1930s in a variety of industries, including business, real estate, entertainment, and health insurance companies. Arbitration is also used for disputes between employees and employers.

Frequently Asked Questions &amp; Answers Q. Do I need an attorney? A. Individuals can choose to use an attorney or represent themselves at arbitration. Only corporations have to be represented by an attorney. but just as if they were going to court, they will most likely choose to hire an attorney. Q. When does the arbitrator make his or her decision? A. The arbitrator may announce his or her decision, called an award, at the end of the arbitration hearing. Sometimes, the arbitrator will wait and issue the award after he or she has had more time to think about the case. However, the arbitrator must issue a written award. You or your attorney will be sent a copy of the award. The award will contain a detailed explanation of the ruling and must be issued within 10 days of the conclusion of the hearing.

What tools do you have to help you feel confident when presenting the Arbitration Agreement? Arbitration Checklist

Tools You Can Use When Presenting the Arbitration Agreement?

Checklist will be inserted here

How can you recall what you did when presenting the arbitration agreement? • Do it the same way every time – get your rhythm. • Use your Arbitration Checklist as the guide. • Make notes on the Arbitration Checklist. • Follow up with Residents who may not be in the community or may be disoriented on admission. • Follow up with POA, DPOA, conservators, etc. who are not present on admission.

What to expect when presenting the Arbitration Agreement The top three problems that we have seen and how to deal with difficult families and residents.

Arbitration Case Cox v. NHC Healthcare ď&amp;#x201A;ˇ Mrs. Cox, age 77, was admitted to St. Mary&#39;s Hospital with chest pains and other symptoms and her husband, Mr. Cox, was no longer going to be able to care for her at home. Mr. Cox met at the nursing home with NHC&#39;s Admissions Coordinator and Mrs. Cox was not present at the meeting. ď&amp;#x201A;ˇ The Admissions Coordinator asked Mr. Cox to sign the nursing home&#39;s &quot;Arbitration Agreement&quot; on his wife&#39;s behalf, even though Mrs. Cox had not been diagnosed or adjudicated as mentally incompetent. He complied with her request.

• Sometime shortly after his wife&#39;s admission, Mr. Cox was also admitted to NHC&#39;s nursing home. On March 8, 2001, Mr. Cox passed away. Mrs. Cox, still a resident at the nursing, passed away on April 19, 2001. • Following her mother&#39;s death, the plaintiff filed suit for Mrs. Cox&#39;s wrongful death. NHC filed a motion with the court to dismiss the lawsuit and compel the matter to arbitration. • The trial court held an evidentiary hearing and NHC&#39;s Admission Coordinator was the only witness for the defendant.

WHAT QUESTIONS DO YOU THINK THE COURT ASKED?

Why was Mr. Cox considered Mrs. Cox&#39;s legal representative? â&amp;#x20AC;˘ Although the Arbitration Agreement specifically defines the term &quot;legal representative&quot; as &quot;anyone authorized by the patient to act on the patient&#39;s behalf&quot;, the Admissions Coordinator admitted that she did not receive an indication from either of the Coxs that Mr. Cox was authorized to sign on Mrs. Cox&#39;s behalf. She stated that she did not know if Mr. Cox had his wife&#39;s authorization to act on her behalf.

Why did the Admission Coordinator ask Mr. Cox to sign if he was not legally authorized to act on her behalf? ď&amp;#x201A;ˇ The Admissions Coordinator testified that she allowed him to sign the Admission Agreement simply because he was Mrs. Cox&#39;s husband.

One of her children described her as &quot;fine mentally&quot; and &quot;very competent&quot;. All three of Mrs. Cox&#39;s children testified in rebuttal to the Admission Coordinator that they believed that their mother was fully competent when Mr. Cox signed the Admission Agreement on her behalf. None of the three children were aware of the document or any other conduct on her part authorizing her husband to act on her behalf or to sign documents for her. The children considered Mrs. Cox to be more mentally competent than her husband.

What was the Courtâ&amp;#x20AC;&amp;#x2122;s Ruling? The Arbitration Agreement was held to be unenforceable because the WRONG PERSON signed. The resident did not sign and the court found that the evidence reflected that the resident was competent and had not given her husband expressed authority to sign the agreement on her behalf. The court found nothing in the record warranting holding that Mr. Cox had the right to waive his wife&#39;s very valuable constitutional right to a jury trial.

Lessons Learned from Other Facilities

Competency looks good other than in new situations

I cannot tell from this if Nancy Vickers was asked to sign or not.

Was Resident asked about this decision? If so, she should have signed or note that she did not understand.

This shows capacity as well

This should say “Bonnie Williams by Cassie Davis”

Resident appears to have capacity here

Resident appears to have capacity here as well

POA is effective “if, and only if, I am incapacitated”

Very nice job getting resident and family member to sign

-- Checklist needs to show who offered it to the resident and when. -- The names of the children need to be filled in. -- I see no POA in favor of daughter.

Nice job getting resident and family member to sign

Nice job getting resident and family member to sign

Nice job getting POA to sign. Where is POA document?

Capacity does not look good here

Capacity does not look good here

Fill in who all it was offered to

The Impact of Arbitration Agreements on Senior Living, 2 of 2 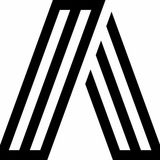