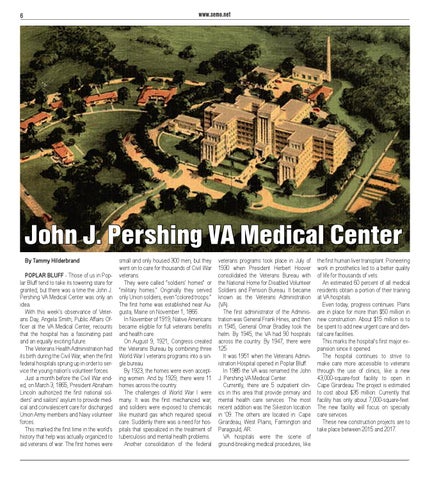 John J. Pershing VA Medical Center By Tammy Hilderbrand POPLAR BLUFF - Those of us in Poplar Bluff tend to take its towering stare for granted, but there was a time the John J. Pershing VA Medical Center was only an idea. With this week’s observance of Veterans Day, Angela Smith, Public Affairs Officer at the VA Medical Center, recounts that the hospital has a fascinating past and an equally exciting future. The Veterans Health Administration had its birth during the Civil War, when the first federal hospitals sprung up in order to service the young nation’s volunteer forces. Just a month before the Civil War ended, on March 3, 1865, President Abraham Lincoln authorized the first national soldiers’ and sailors’ asylum to provide medical and convalescent care for discharged Union Army members and Navy volunteer forces. This marked the first time in the world’s history that help was actually organized to aid veterans of war. The first homes were

small and only housed 300 men, but they went on to care for thousands of Civil War veterans. They were called “soldiers’ homes” or “military homes.” Originally they served only Union soldiers, even “colored troops.” The first home was established near Augusta, Maine on November 1, 1866. In November of 1919, Native Americans became eligible for full veterans benefits and health care. On August 9, 1921, Congress created the Veterans Bureau by combining three World War I veterans programs into a single bureau. By 1923, the homes were even accepting women. And by 1929, there were 11 homes across the country. The challenges of World War I were many. It was the first mechanized war, and soldiers were exposed to chemicals like mustard gas which required special care. Suddenly there was a need for hospitals that specialized in the treatment of tuberculosis and mental health problems. Another consolidation of the federal

veterans programs took place in July of 1930 when President Herbert Hoover consolidated the Veterans Bureau with the National Home for Disabled Volunteer Soldiers and Pension Bureau. It became known as the Veterans Administration (VA). The first administrator of the Administration was General Frank Hines, and then in 1945, General Omar Bradley took the helm. By 1945, the VA had 90 hospitals across the country. By 1947, there were 125. It was 1951 when the Veterans Administration Hospital opened in Poplar Bluff. In 1985 the VA was renamed the John J. Pershing VA Medical Center. Currently, there are 5 outpatient clinics in this area that provide primary and mental health care services. The most recent addition was the Sikeston location in ’09. The others are located in: Cape Girardeau, West Plains, Farmington and Paragould, AR. VA hospitals were the scene of ground-breaking medical procedures, like

the first human liver transplant. Pioneering work in prosthetics led to a better quality of life for thousands of vets. An estimated 60 percent of all medical residents obtain a portion of their training at VA hospitals. Even today, progress continues. Plans are in place for more than $50 million in new construction. About $15 million is to be spent to add new urgent care and dental care facilities. This marks the hospital’s first major expansion since it opened. The hospital continues to strive to make care more accessible to veterans through the use of clinics, like a new 43,000-square-foot facility to open in Cape Girardeau. The project is estimated to cost about $35 million. Currently that facility has only about 7,000-square-feet. The new facility will focus on specialty care services. These new construction projects are to take place between 2015 and 2017. 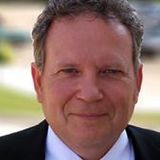