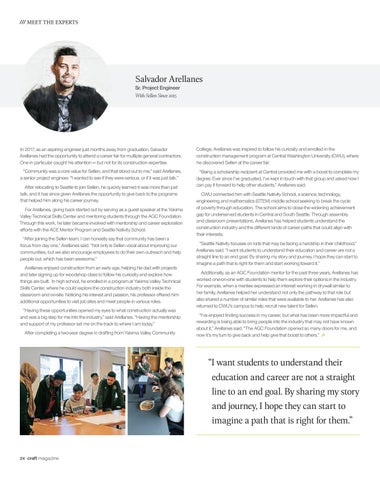 In 2017, as an aspiring engineer just months away from graduation, Salvador Arellanes had the opportunity to attend a career fair for multiple general contractors. One in particular caught his attention — but not for its construction expertise.

College, Arellanes was inspired to follow his curiosity and enrolled in the construction management program at Central Washington University (CWU), where he discovered Sellen at the career fair.

“Community was a core value for Sellen, and that stood out to me,” said Arellanes, a senior project engineer. “I wanted to see if they were serious, or if it was just talk.”

“Being a scholarship recipient at Central provided me with a boost to complete my degree. Ever since I’ve graduated, I’ve kept in touch with that group and asked how I can pay it forward to help other students,” Arellanes said.

After relocating to Seattle to join Sellen, he quickly learned it was more than just talk, and it has since given Arellanes the opportunity to give back to the programs that helped him along his career journey. For Arellanes, giving back started out by serving as a guest speaker at the Yakima Valley Technical Skills Center and mentoring students through the AGC Foundation. Through this work, he later became involved with mentorship and career exploration efforts with the ACE Mentor Program and Seattle Nativity School. “After joining the Sellen team, I can honestly say that community has been a focus from day one,” Arellanes said. “Not only is Sellen vocal about improving our communities, but we also encourage employees to do their own outreach and help people out, which has been awesome.” Arellanes enjoyed construction from an early age, helping his dad with projects and later signing up for woodshop class to follow his curiosity and explore how things are built. In high school, he enrolled in a program at Yakima Valley Technical Skills Center, where he could explore the construction industry both inside the classroom and on-site. Noticing his interest and passion, his professor offered him additional opportunities to visit job sites and meet people in various roles. “Having these opportunities opened my eyes to what construction actually was and was a big step for me into the industry,” said Arellanes. “Having the mentorship and support of my professor set me on the track to where I am today.” After completing a two-year degree in drafting from Yakima Valley Community

CWU connected him with Seattle Nativity School, a science, technology, engineering and mathematics (STEM) middle school seeking to break the cycle of poverty through education. The school aims to close the widening achievement gap for underserved students in Central and South Seattle. Through assembly and classroom presentations, Arellanes has helped students understand the construction industry and the different kinds of career paths that could align with their interests. “Seattle Nativity focuses on kids that may be facing a hardship in their childhood,” Arellanes said. “I want students to understand their education and career are not a straight line to an end goal. By sharing my story and journey, I hope they can start to imagine a path that is right for them and start working toward it.” Additionally, as an AGC Foundation mentor for the past three years, Arellanes has worked one-on-one with students to help them explore their options in the industry. For example, when a mentee expressed an interest working in drywall similar to her family, Arellanes helped her understand not only the pathway to that role but also shared a number of similar roles that were available to her. Arellanes has also returned to CWU’s campus to help recruit new talent for Sellen. “I’ve enjoyed finding success in my career, but what has been more impactful and rewarding is being able to bring people into the industry that may not have known about it,” Arellanes said. “The AGC Foundation opened so many doors for me, and now it’s my turn to give back and help give that boost to others.”

“I want students to understand their education and career are not a straight line to an end goal. By sharing my story and journey, I hope they can start to imagine a path that is right for them.” 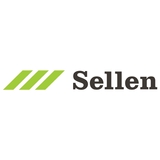