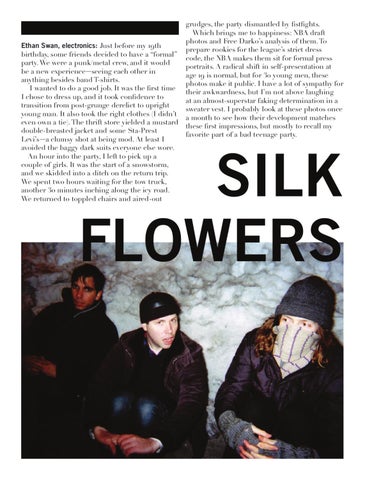 Ethan Swan, electronics: Just before my 19th birthday, some friends decided to have a “formal” party. We were a punk/metal crew, and it would be a new experience—seeing each other in anything besides band T-shirts. I wanted to do a good job. It was the first time I chose to dress up, and it took confidence to transition from post-grunge derelict to upright young man. It also took the right clothes (I didn’t even own a tie). The thrift store yielded a mustard double-breasted jacket and some Sta-Prest Levi’s—a clumsy shot at being mod. At least I avoided the baggy dark suits everyone else wore. An hour into the party, I left to pick up a couple of girls. It was the start of a snowstorm, and we skidded into a ditch on the return trip. We spent two hours waiting for the tow truck, another 30 minutes inching along the icy road. We returned to toppled chairs and aired-out

grudges, the party dismantled by fistfights. Which brings me to happiness: NBA draft photos and Free Darko’s analysis of them. To prepare rookies for the league’s strict dress code, the NBA makes them sit for formal press portraits. A radical shift in self-presentation at age 19 is normal, but for 30 young men, these photos make it public. I have a lot of sympathy for their awkwardness, but I’m not above laughing at an almost-superstar faking determination in a sweater vest. I probably look at these photos once a month to see how their development matches these first impressions, but mostly to recall my favorite part of a bad teenage party. 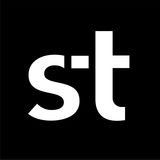