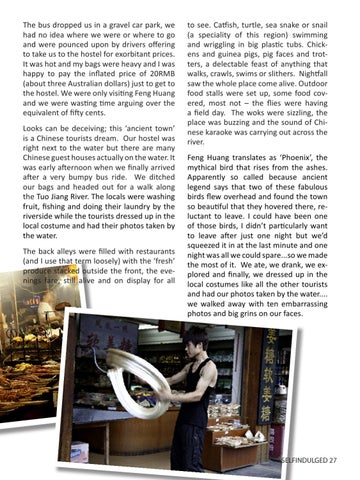 The bus dropped us in a gravel car park, we had no idea where we were or where to go and were pounced upon by drivers offering to take us to the hostel for exorbitant prices. It was hot and my bags were heavy and I was happy to pay the inflated price of 20RMB (about three Australian dollars) just to get to the hostel. We were only visiting Feng Huang and we were wasting time arguing over the equivalent of fifty cents. Looks can be deceiving; this ‘ancient town’ is a Chinese tourists dream. Our hostel was right next to the water but there are many Chinese guest houses actually on the water. It was early afternoon when we finally arrived after a very bumpy bus ride. We ditched our bags and headed out for a walk along the Tuo Jiang River. The locals were washing fruit, fishing and doing their laundry by the riverside while the tourists dressed up in the local costume and had their photos taken by the water. The back alleys were filled with restaurants (and I use that term loosely) with the ‘fresh’ produce stacked outside the front, the evenings fare, still alive and on display for all

to see. Catfish, turtle, sea snake or snail (a speciality of this region) swimming and wriggling in big plastic tubs. Chickens and guinea pigs, pig faces and trotters, a delectable feast of anything that walks, crawls, swims or slithers. Nightfall saw the whole place come alive. Outdoor food stalls were set up, some food covered, most not – the flies were having a field day. The woks were sizzling, the place was buzzing and the sound of Chinese karaoke was carrying out across the river. Feng Huang translates as ‘Phoenix’, the mythical bird that rises from the ashes. Apparently so called because ancient legend says that two of these fabulous birds flew overhead and found the town so beautiful that they hovered there, reluctant to leave. I could have been one of those birds, I didn’t particularly want to leave after just one night but we’d squeezed it in at the last minute and one night was all we could spare...so we made the most of it. We ate, we drank, we explored and finally, we dressed up in the local costumes like all the other tourists and had our photos taken by the water.... we walked away with ten embarrassing photos and big grins on our faces.

Self Indulged is a free digital travel magazine showcasing travel tales and stunning travel photography from all corners of our small and wonderful planet. Issue 8 of Self Indulged Travel Magazine is bursting with great photos & travel tales, including a fantastic 'CHINA' special in this issue. Costs nothing but time to have a look...so pop the kettle on, take a break and get your travel fix. 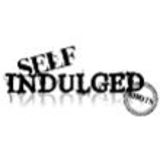