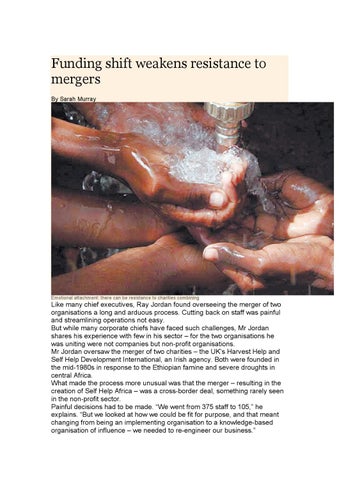 Emotional attachment: there can be resistance to charities combining

Like many chief executives, Ray Jordan found overseeing the merger of two organisations a long and arduous process. Cutting back on staff was painful and streamlining operations not easy. But while many corporate chiefs have faced such challenges, Mr Jordan shares his experience with few in his sector – for the two organisations he was uniting were not companies but non-profit organisations. Mr Jordan oversaw the merger of two charities – the UK’s Harvest Help and Self Help Development International, an Irish agency. Both were founded in the mid-1980s in response to the Ethiopian famine and severe droughts in central Africa. What made the process more unusual was that the merger – resulting in the creation of Self Help Africa – was a cross-border deal, something rarely seen in the non-profit sector. Painful decisions had to be made. “We went from 375 staff to 105,” he explains. “But we looked at how we could be fit for purpose, and that meant changing from being an implementing organisation to a knowledge-based organisation of influence – we needed to re-engineer our business.”

What helped was strong support from trustees and the chairman, whose career had been spent in agri-business and who had been involved in the merger of two large private sector organisations. “The board got it straight away,” says Mr Jordan. “And it was great having someone who could see all the benefits, without the emotional attachment to the past.” It took three years to get the new organisation running smoothly and two years to start reaping the benefits. But the result has been a more diverse donor base, greater funding security and an increase in income and unrestricted reserves. “Our organisation has never been stronger in terms of impact and stability,” says Mr Jordan. This kind of merger – common in the private sector – is not often seen in the public and non-profit sectors. “The sector will talk openly about collaboration but when it gets into meaningful collaborative working, including mergers, there seems to be huge reluctance,” says Mr Jordan. Simon Kingston, who leads the global development practice at Russell Reynolds Associates executive search firm, says: “In terms of organisations of any scale, it’s hard to think of obvious mergers between separate NGOs.” Rather, he says, it tends to be the opposite: “What bedevils the sector is the tendency towards proliferation, with organisations often doing the same things.” From a human resource standpoint, the changing nature of non-profit and public sector leadership also favours merger activity. “NGOs have less experience with laying people off,” says Raj Kumar, president of Devex, an online recruiting hub for the global development community. “But they have been changing their executive leadership, with more people coming from the corporate sector. So many are better equipped than they might have been a few years ago.” Even so, the path towards mergers in the global public sector is strewn with obstacles. Absence of the profit motive is one: measures of success in the development world – whether improved healthcare for the poor or increased access to education – are less tangible. Without clear financial benefits on the horizon, it is harder to make the case for taking on the risks involved in a merger. Moreover, arrangements intended to increase efficiency in organisations that make no profit and often struggle to find operational funding are unlikely to attract the bankers, lawyers, consultants and outplacement firms that facilitate deal-making, restructuring and integration. Some believe resistance to non-profit mergers may be less about structural or financial barriers and more about cultural resistance. Mr Jordan, for example, sees emotional attachment as one of the biggest obstacles: “You have brilliant people who are wedded to the past. The emotional side is a huge block.” When people become emotionally attached to an organisation, there is a danger that they spending more time and effort working out how to protect or expand their own institutions than on how to have a bigger impact on the problems they were set up to tackle. “A lot of people are protecting their own patch,” says Mr Jordan. “And it’s easier to do nothing than take the risk of being radical and asking whether we are doing the best we can with our human and financial resources.” Like it or not, the sector may well have to overcome its cultural resistance to consolidation, with funding providing the catalyst for consolidation. As donors

look for more impact, they are issuing fewer grants but larger ones, which tends to benefit large NGOs at the expense of smaller organisations. They are also favouring grants to consortiums and projects involving several partners. This trend is set to accelerate in a sector increasingly dominated by organisations established by former private sector executives, such as Bill Gates, the Microsoft founder. For anyone who cares about development, this is good news, says Mr Jordan. “You get more bang for your buck by coming together than by working independently,” he says. “And that impacts the people you’re working for.”

Self Help Africa CEO Ray Jordan is interviewed by Financial Times for an article looking at mergers in the not for profit sector. 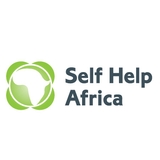