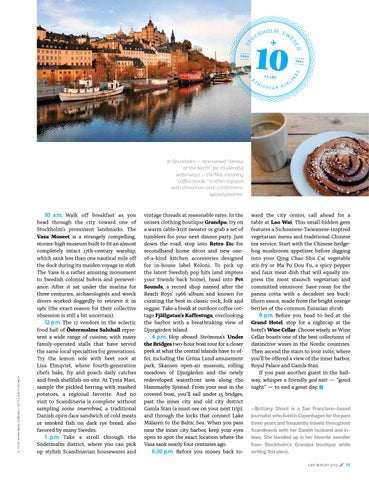 In Stockholm — nicknamed “Venice of the North” for its plentiful waterways — the fika, meaning “coffee break,” is often enjoyed with cinnamon-and-cardamomspiced pastries.

10 a.m. Walk off breakfast as you head through the city toward one of Stockholm’s prominent landmarks. The Vasa Museet is a strangely compelling, stories-high museum built to fit an almost completely intact 17th-century warship, which sank less than one nautical mile off the dock during its maiden voyage in 1628. The Vasa is a rather amusing monument to Swedish colonial hubris and perseverance: After it sat under the marina for three centuries, archaeologists and wreck divers worked doggedly to retrieve it in 1961 (the exact reason for their collective obsession is still a bit uncertain). 12 p.m. The 17 vendors in the eclectic food hall of Östermalms Saluhall represent a wide range of cuisine, with many family-operated stalls that have served the same local specialties for generations. Try the lemon sole with beet root at Lisa Elmqvist, where fourth-generation chefs bake, fry and poach daily catches and fresh shellfish on-site. At Tysta Mari, sample the pickled herring with mashed potatoes, a regional favorite. And no visit to Scandinavia is complete without sampling some smørrebrød, a traditional Danish open-face sandwich of cold meats or smoked fish on dark rye bread, also favored by many Swedes. 1 p.m. Take a stroll through the Södermalm district, where you can pick up stylish Scandinavian housewares and

vintage threads at reasonable rates. In the unisex clothing boutique Grandpa, try on a warm cable-knit sweater or grab a set of tumblers for your next dinner party. Just down the road, stop into Retro Etc for secondhand home décor and new oneof-a-kind kitchen accessories designed for in-house label Koloni. To pick up the latest Swedish pop hits (and impress your friends back home), head into Pet Sounds, a record shop named after the Beach Boys’ 1966 album and known for curating the best in classic rock, folk and reggae. Take a break at outdoor coffee cottage Fjällgatan’s Kaffestuga, overlooking the harbor with a breathtaking view of Djurgärden island. 4 p.m. Hop aboard Strömma’s Under the Bridges two-hour boat tour for a closer peek at what the central islands have to offer, including the Gröna Lund amusement park, Skansen open-air museum, rolling meadows of Djurgården and the newly redeveloped waterfront area along the Hammarby Sjöstad. From your seat in the covered boat, you’ll sail under 15 bridges, past the inner city and old city district Gamla Stan (a must-see on your next trip), and through the locks that connect Lake Mälaren to the Baltic Sea. When you pass near the inner city harbor, keep your eyes open to spot the exact location where the Vasa sank nearly four centuries ago. 6:30 p.m. Before you mosey back to-

ward the city center, call ahead for a table at Lao Wai. This small hidden gem features a Sichuanese-Taiwanese-inspired vegetarian menu and traditional Chinese tea service. Start with the Chinese hedgehog mushroom appetizer before digging into your Qing Chao Shu Cai vegetable stir-fry or Ma Po Dou Fu, a spicy pepper and faux meat dish that will equally impress the most staunch vegetarian and committed omnivore. Save room for the panna cotta with a decadent sea buckthorn sauce, made from the bright orange berries of the common Eurasian shrub. 9 p.m. Before you head to bed at the Grand Hotel, stop for a nightcap at the hotel’s Wine Cellar. Choose wisely, as Wine Cellar boasts one of the best collections of distinctive wines in the Nordic countries. Then ascend the stairs to your suite, where you’ll be offered a view of the inner harbor, Royal Palace and Gamla Stan. If you pass another guest in the hallway, whisper a friendly god natt — “good night” — to end a great day.

—Brittany Shoot is a San Francisco–based journalist who lived in Copenhagen for the past three years and frequently travels throughout Scandinavia with her Danish husband and inlaws. She bundled up in her favorite sweater from Stockholm’s Grandpa boutique while writing this piece. july/august 2013

Selamta, the in-flight magazine of Ethiopian Airlines, is a world-class publication with an array of coverage as diverse as the airline and the regions it serves. Its pages feature business, technology, health, travel, sports, culture, fine dining and more. 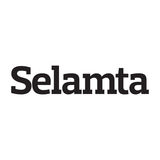