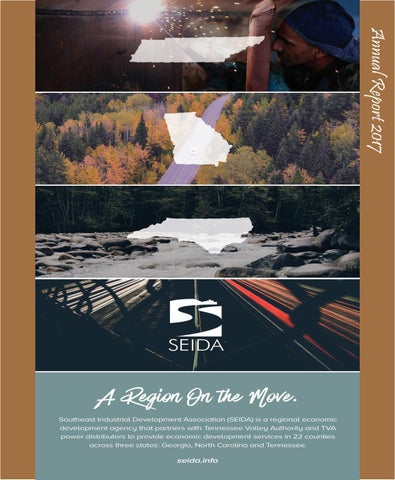 The Southeast Industrial Development Association, comprised of eleven local power distributors and the Tennessee Valley Authority, works with strategic economic development partners across a three-state region to attract and retain jobs that generate capital investments to create vibrant economies. SEIDA provides a coordinated approach to the delivery of a range of economic development services to assist businesses with locations, expansions, and identification of financing opportunities, infrastructure development, and marketing and demographic reserach. The southeast region maintains its progress in obtaining significant capital investment into its communities and the creation of jobs for its citizens. Companies are locating within the SEIDA region because of opportunities available for training, access to a skilled workforce, great transportation networks and collaborative leadership with a vision.

Message From the Chairman

Announcements of new company locations and existing industry expansions within the SEIDA region mark 2017 as another successful year for economic development growth in our twenty-two-county, three-state service area. With the creation of over 1,400 new jobs, the investments made by these companies will provide opportunities for our communities that will have a positive economic impact for years to come. The Southeast Industrial Development Association looks forward to continuing the facilitaion of the creation of jobs, capital investment and additional power load throughout Mike Partin, SVEC north Georgia, southwestern North Carolina and southeast Tennessee.

The SEIDA region continues to experience economic growth as a result of existing industry expansions and new capital investments. We are exctited to report the following companies made announcements in 2017. La-Z-Boy plans expansion at Dayton/Rhea County Facility La-Z-Boy, Rhea Countyâ&amp;#x20AC;&amp;#x2122;s largest employer, held a groundbreaking to celebrate the expansion of its current facility as well as the addition of a new Innovation Center and logistics facilities. The company plans to invest approximately $26 million over the next three years and create 115 new jobs in Dayton. Nokian Tyres Selects Dayton, Tennessee as New Home Finnish company, Nokian Tyres, announced the largest foreign direct investment ever in Rhea County, unveiling plans to build a new $360 million manufacturing plant that will create at least 400 new jobs in Dayton. The new plant is expected to be operational in 2020 and produce 4 million passenger, SUV and light-truck tires at the facility annually. Textile Corporation of America, Inc. to Location in Pikeville, TN Textile Corporation of America, Inc. (TCA) announced plans to locate its headquarters and manufacturing facility in Bledsoe County, Tennessee. TCA will invest $27.1 million in the community and create 1,000 jobs. The company will be located in the former Dura Automotive Building in Pikeville. The company produces quality industrial and institutional textile products including apparel, bedding healthcare, hospitality and kitchen linens.

Business and Industry Locations and Expansions

Business and Industry Locations and Expansions Shaw Invests $42 Million at Meigs County, TN Carpet Plant In October 2017, Shaw Industries Group, Inc. (Shaw) announced plans to invest more than $42 million in its Meigs County, Tenn. carpet plant to modernize the facility allowing the company to use both nylon and polyester fiber at this facility. Shaw is the largest employer in Meigs employing approximately 370 associates. This investment will create 75 new jobs. The first equipment was scheduled to be operational in November with additional machinery coming online through June 2018. 75 Regional Commerce Park Designated as a Select Tennessee Certified Site The McMinn County Economic Development Agency secured certified site designation for the 75 Regional Commerce Park located at Pleasant Grove Road in Sweetwater, Tennessee. The 148.5 acre site offers approximately 144 developable acres with all utilities readily available. This site is now among the 52 certified sites in the Select Tennessee Certified Site Program.

TNECD Property Evaluation Program (PEP) On June 9, 2017 the Tennessee Department of Community and Economic Development (TNECD) announced eight counties that were chosen to participate in the Spring Round of the Property Evaluation Program. Bledsoe County is among those eight counties. The PEP launched in 2015 and serves to improve the inventory of industrial sites and buildings in Tennessee by evaluating potential properties, advising counties on where investment may be most beneficial and addressing needs to help make sites more viable for industrial prospects. Bluegrass Underground Moves to Grundy County, Tennessee Nashville, TN August 18, 2017â&amp;#x20AC;&amp;#x201D;Bluegrass Underground, the international concert destination and 13-time EMMY award-winning PBS music series, has found a new, permanent home in The Caverns, located in Grundy County near Pelham, TN, at the base of Monteagle Mountain. The new venue boasts singular natural acoustics and will accommodate many more subterranean music lovers in response to increasing demand for tickets to Bluegrass Underground and for other live music concerts across expanding genres. For more information visit bluegrassunderground.com.

Three Corners Economic Development Initiative SEIDA staff met with our economic development partners in Cherokee, Clay, Fannin, Polk, Towns, and Union Counties to discuss the potential of the development of a regional marketing initiative for that corner of the region where Georgia, North Carolina and Tennessee come together. So far, SEIDA has been able to provide those communities with much needed workforce data for the Three Corners region utilizing EMSI data. On July 11, Blue Ridge Mountain EMC hosted the group for a training session of the TVASites.com Local InSite Tool and SEIDA scheduled a tour of available industrial properties throughout the region for TVA’s Dianne Nunez. Marion County Regional Institute for Higher Education On Friday, June 16, Marion County officials alongside state and regional partners, broke ground on Phase II of the Marion County Regional Institute for Higher Education. The new facility will offer Advance Manufacturing and Information Technology programs to provide a pipeline of talent for area business and industry. Appreciation and recognition was expressed for the following funding partners: Appalachian Regional Commission (ARC), Marion County, Tennessee Board of Regents— Chattanooga State Community &amp; Technical College, TNECD—Fast Track Development Grant, Town of Kimball and US EDA—Public Works Grant.

NGEMC Annual Meeting On August 3, 2017, SEIDA staff attended North Georgia Electric Membership’s 81st Annual Meeting. Over 1,200 members and guests attended the meeting held at the Northwest Georgia Trade and Convention Center in Dalton. The theme of the meeting was Power with Purpose and highlighted the commitment of service from veterans, local law enforcement and first responders including line workers.

Making Tracks with Google Trekker in southeast Tennessee, north Georgia and southwest North Carolina The Southeast Industrial Development Association is excited to have partnered with the Southeast Tennessee Tourism Association to collect imagery of special places in our region in partnership with Google Maps. We borrowed the Trekker camera, hiked around these unique and amazing locations, and will be sharing these images for processing and future inclusion as panoramic images that everyone can see and enjoy on Street View in Google Maps. What this technology and opportunity provides is an enhanced way for visitors to connect with these special places in a way they may never have before. In fact, we expect many people may never get to explore these places in person, so we are so happy to open it up for the world to enjoy. We are excited to annouce Phase 1 of imagery went live in August 2017. Highlights can be found at SoutheastTennessee.com/Trekker. Phase 2 imagery is set to launch in January 2018 and to include several locations in the SEIDA region. “Some of the unique locations to include are the Murphy Riverwalk, Bell Mountain Park, Toccoa River Swinging Bridge, and we even captured the highest point in Georgia… Brasstown Bald Observation Tower &amp; Trail.” -Richie Johnson, Southeast TN Tourism Association. Google Trekker Quick Facts: • Google took the same camera that’s on the Google car and put it on a backpack. • 15 Camera lenses pointing in every direction that take a photo every 2.5 seconds. • Weighs close to 50 lbs, has GPS antennas, controlled by a smartphone, 8 hour battery life. • We send it back to Google and they create the Street View Pictured above: Stephanie Watkins on Google Maps (about 6 months). • We used it on Foot, Utility Vehicle, Motorboat, and Canoe. • We covered more than 300 miles of Parks, Trails, Blueways, Greenways. • We had 2 different 2-month loan periods.

SEIDA staff attended the TVA Economic Development Forum held in February, where economic developers learned about how to Prepare for Disruption as technology changes the way we work. Two of SEIDA’s regional partners, Carl Campbell, Dalton-Whitfield JDA, and Christie Arp, Fannin County Development Authority, were recognized at the Forum as graduates of TVA’s Rural Leadership Institute. 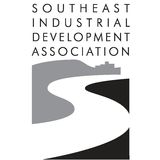