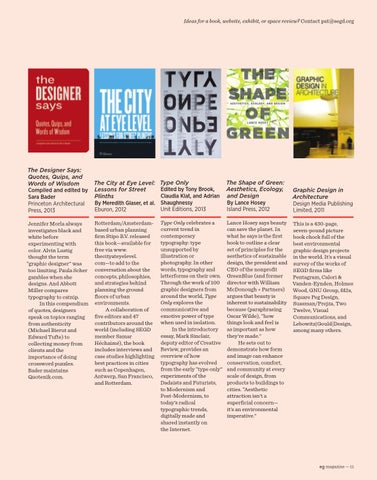 The Designer Says: Quotes, Quips, and Words of Wisdom Compiled and edited by Sara Bader Princeton Architectural Press, 2013 Jennifer Morla always investigates black and white before experimenting with color. Alvin Lustig thought the term “graphic designer” was too limiting. Paula Scher gambles when she designs. And Abbott Miller compares typography to catnip. In this compendium of quotes, designers speak on topics ranging from authenticity (Michael Bierut and Edward Tufte) to collecting money from clients and the importance of doing crossword puzzles. Bader maintains Quotenik.com.

The Shape of Green: Aesthetics, Ecology, and Design By Lance Hosey Island Press, 2012

Rotterdam/Amsterdambased urban planning firm Stipo B.V. released this book—available for free via www. thecityateyelevel. com—to add to the conversation about the concepts, philosophies, and strategies behind planning the ground floors of urban environments. A collaboration of five editors and 47 contributors around the world (including SEGD member Samar Héchaimé), the book includes interviews and case studies highlighting best practices in cities such as Copenhagen, Antwerp, San Francisco, and Rotterdam.

Type Only celebrates a current trend in contemporary typography: type unsupported by illustration or photography. In other words, typography and letterforms on their own. Through the work of 100 graphic designers from around the world, Type Only explores the communicative and emotive power of type when used in isolation. In the introductory essay, Mark Sinclair, deputy editor of Creative Review, provides an overview of how typography has evolved from the early “type only” experiments of the Dadaists and Futurists, to Modernism and Post-Modernism, to today’s radical typographic trends, digitally made and shared instantly on the Internet.

Lance Hosey says beauty can save the planet. In what he says is the first book to outline a clear set of principles for the aesthetics of sustainable design, the president and CEO of the nonprofit GreenBlue (and former director with William McDonough + Partners) argues that beauty is inherent to sustainability because (paraphrasing Oscar Wilde), “how things look and feel is as important as how they’re made.” He sets out to demonstrate how form and image can enhance conservation, comfort, and community at every scale of design, from products to buildings to cities. “Aesthetic attraction isn’t a superficial concern— it’s an environmental imperative.”

eg is the magazine of choice for creative professionals working at the intersection of communication design and the built environment.