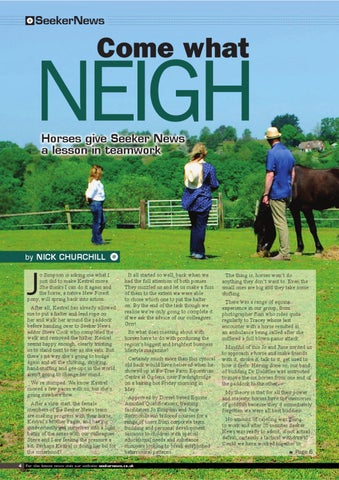 NEIGH Horses give Seeker News a lesson in teamwork

o Simpson is asking me what I just did to make Kestrel move. She thinks I can do it again and the horse, a native New Forest pony, will spring back into action. After all, Kestrel has already allowed me to put a halter and lead rope on her and walk her around the paddock before handing over to Seeker News editor Steve Cook who completed the walk and removed the halter. Kestrel seems happy enough, clearly trusting us to stand next to her as she eats. But there’s no way she’s going to budge again and all the clicking, stroking, aren’t going to change her mind. We’re stumped. We know Kestrel moved a few paces with us, but she’s going nowhere now. After a slow start, the female members of the Seeker News team are making progress with their horse, Kestrel’s brother Fagin, and having inadvertently got ourselves into a light battle of the sexes with our colleagues Steve and I are feeling the pressure a bit. Perhaps Kestrel is doing her bit for the sisterhood?

It all started so well, back when we had the full attention of both ponies. They nuzzled us and let us make a fuss of them to the extent we were able to chose which one to put the halter on. By the end of the task though we realise we’re only going to complete it if we ask the advice of our colleagues. Grrr! So what does messing about with horses have to do with producing the region’s biggest and brightest business lifestyle magazine? Certainly much more than this cynical old hack would have believed when he showed up at Fir Tree Farm Equestrian Centre at Ogdens, near Fordingbridge on a baking hot Friday morning in May.

The thing is, horses won’t do anything they don’t want to. Even the small ones are big and they take some shifting. There was a range of equine experience in our group, from photographer Sian who rides quite regularly to Tracey whose last encounter with a horse resulted in an ambulance being called after she suffered a full blown panic attack. Mindful of this Jo and June invited us to approach a horse and make friends with it, stroke it, talk to it, get used to how it feels. Having done so, our band of budding Dr Dolittles was instructed to move the six horses from one end of the paddock to the other. My theory is that for all their power and majesty, horses have the memories

forgotten we were all best buddies! No amount of cajoling was going to work and after 20 minutes Seeker News was ready to admit, if not actual defeat, certainly a tactical withdrawal. Could we have worked together to Page 6 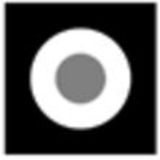 What the Seeker News staff learnt about teamwork from horses. A family summer in Bournemouth with CBeebies' Chris Jarvis. John Lydon talks t...

What the Seeker News staff learnt about teamwork from horses. A family summer in Bournemouth with CBeebies' Chris Jarvis. John Lydon talks t...