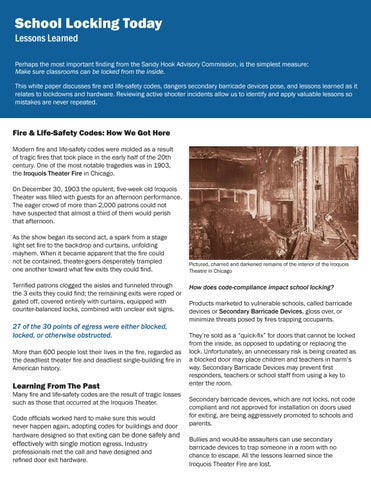 Perhaps the most important finding from the Sandy Hook Advisory Commission, is the simplest measure: Make sure classrooms can be locked from the inside. This white paper discusses fire and life-safety codes, dangers secondary barricade devices pose, and lessons learned as it relates to lockdowns and hardware. Reviewing active shooter incidents allow us to identify and apply valuable lessons so mistakes are never repeated.

Fire & Life-Safety Codes: How We Got Here Modern fire and life-safety codes were molded as a result of tragic fires that took place in the early half of the 20th century. One of the most notable tragedies was in 1903, the Iroquois Theater Fire in Chicago. On December 30, 1903 the opulent, five-week old Iroquois Theater was filled with guests for an afternoon performance. The eager crowd of more than 2,000 patrons could not have suspected that almost a third of them would perish that afternoon. As the show began its second act, a spark from a stage light set fire to the backdrop and curtains, unfolding mayhem. When it became apparent that the fire could not be contained, theater-goers desperately trampled one another toward what few exits they could find. Terrified patrons clogged the aisles and funneled through the 3 exits they could find; the remaining exits were roped or gated off, covered entirely with curtains, equipped with counter-balanced locks, combined with unclear exit signs.

27 of the 30 points of egress were either blocked, locked, or otherwise obstructed. More than 600 people lost their lives in the fire, regarded as the deadliest theater fire and deadliest single-building fire in American history.

Learning From The Past

Many fire and life-safety codes are the result of tragic losses such as those that occurred at the Iroquois Theater. Code officials worked hard to make sure this would never happen again, adopting codes for buildings and door hardware designed so that exiting can be done safely and effectively with single motion egress. Industry professionals met the call and have designed and refined door exit hardware.

Pictured, charred and darkened remains of the interior of the Iroquois Theatre in Chicago

How does code-compliance impact school locking? Products marketed to vulnerable schools, called barricade devices or Secondary Barricade Devices, gloss over, or minimize threats posed by fires trapping occupants. They’re sold as a “quick-fix” for doors that cannot be locked from the inside, as opposed to updating or replacing the lock. Unfortunately, an unnecessary risk is being created as a blocked door may place children and teachers in harm’s way. Secondary Barricade Devices may prevent first responders, teachers or school staff from using a key to enter the room. Secondary barricade devices, which are not locks, not code compliant and not approved for installation on doors used for exiting, are being aggressively promoted to schools and parents. Bullies and would-be assaulters can use secondary barricade devices to trap someone in a room with no chance to escape. All the lessons learned since the Iroquois Theater Fire are lost.

Empowering schools with a safe & secure learning environment Similar to the scenario laid out in the Iroquois Theater, secondary barricade devices trap occupants in place preventing anyone from quickly exiting if they need to. When we say quickly exiting, we mean with no special knowledge required and with one motion, pulling the lever down or pressing the panic bar like you normally would.

Besides impeding the ability to enter/exit and not meeting ADA requirements, secondary barricade devices create a new set of life-safety challenges. If an unauthorized person engages the blocking device to barricade the door, administrators may be unable to enter, creating a liability. Statistically, while school shootings are still very rare, data shows that they are happening more often.

From 1999 to 2014, the average number of days between shootings was 124 days. From 2015 to 2018, the average was 77 days. We learned from the 2006 shooting at West Nickel Mines School in PA (a.1) just how deadly secondary barricades can be. First responders were unable to enter and trapped occupants were unable to flee, resulting in the death of five school children. In 2007, we revisit the tragedies associated with barricading at Virginia Tech (a.2) when a gunman trapped students by chaining several main doors before he entered and opened fire.

In May of 2019, the Highland Park STEM school shooting in Colorado was one of several threats and shootings that month. Students recalled that the assailant entered class late, and instead of taking his seat, fumbled with the two doors in the classroom before pulling out his gun. Had there been barricades for the assailant to engage, it is safe to say the outcome would have been much, much worse. Fortunately, in this case, there were no secondary barricades for him to use. Heroic students tackled the shooter allowing their classmates to quickly flee the room.

Pictured, a single slide secondary barricade device designed to freeze the lever and door in place, trapping occupants in the room.

Each tragedy has provided momentum (as well as state and federal funds) towards initiatives aimed at keeping schools safe. While secondary barricade devices seem like an easy solution, we must do our part in making schools aware of the dangers that they pose.

The National Association of State Fire Marshalsâ&#x20AC;&#x2122; Classroom Door Security & Locking Hardware Checklist, highlights the importance of being able to effectively secure yourself from the interior of the classroom, and to steer away from locksets that require teachers to go in the hall to lock the door. The Department of Homeland Security recommends employing the use of a push-button mechanism to avoid having to scramble for a key.

Spending precious dollars wisely is important. We have not lost any students in an active shooter situation in the United States when they are secured behind a locked door. School Lockdowns: Lessons Learned

Reviewing active shooter incidents as it relates to door hardware, allows us to reflect and apply valuable lessons so mistakes are never repeated.

Pictured, a secondary barricade device that freezes the door closer and door in place from the inside preventing first responders from entering.

In 2005 at Red Lake Senior High (a.3), we learned the importance of sheltering in place. The active shooter repeatedly tried opening classrooms, only to find that those doors had been locked.

US Attorney Tom Heffelfinger said, “As the shooter walked down the hallways of the Red Lake High School four weeks ago, he repeatedly tried to open classroom doors, only to find that those doors had been locked,” Heffelfinger said. “The immediate action of Red Lake staff and teachers to lock the doors, to herd the students into safe rooms, and to evacuate the students when the school became (safe), undoubtedly saved lives.”

An unauthorized person entered the facility and barricaded himself in a classroom with 2x4s and bolts. With him, he held five school girls hostage, aged 6-13. First responders were unable to immediately enter the classroom and had to breach a window, but not before he executed the trapped girls one by one and taking his own life.

A gunman who killed 32 people chained and locked several main doors and went from room to room shooting occupants. Because the doors secured by the shooter delayed law enforcement response as well as deterring egress, it clearly had an effect on the outcome of the incident.

The Sandy Hook Advisory Commission reported that lives were lost in a classroom when a substitute teacher didn’t have a key and didn’t receive training on the security protocols prior.

A teacher was killed by the shooter while trying to lock the classroom door from the outside. Separately, with no teacher present and no time to stack furniture, a student tried to barricade the door using his body resulting in several gunshot wounds.

In 2012, we learned the importance of training all individuals on emergency protocols. The Sandy Hook (a.4) Advisory Commission reported that lives were lost in a classroom when a substitute teacher didn’t have a key and didn’t receive training on the security protocols. Stoneman Douglas’ (a.5) school shooting revealed that a teacher was killed by the shooter while trying to lock the classroom door from the corridor side of the door. Separately and with no teacher present, no key fob or credentials, and no time to stack furniture, a student desperately barricaded the door using his body resulting in several life-altering gunshot wounds and injuries.

Classroom function (b.1) door locks were originally designed with a key on the corridor side of the door. They have been in use for decades as a way of entry and locking the door when the teacher leaves the room at the end of the day. Intruder function (b.2), or double cylinder, door locks were a response to lessons learned at Columbine, so that the teacher didn’t have to open the door to use their key.

Sandy Hook taught us that only relying upon a teacher and key was not an effective method. Red Button Intruder Locks (b.3) allow anyone in the room to quickly barricade the door in a lockdown, while retaining single motion egress and code-compliant keyed entry. Pressing the button projects a locking bolt, changes the visual indicator and safely protects everyone in the room.

Red button locking is the logical lock function evolution and a code-compliant response to today’s need to barricade or lockdown a classroom door quickly. Secondary barricade devices may be tempting to install as an inexpensive lockdown method, however, as experts in both security and door hardware, it’s imperative that we do our part in voicing life-safety concerns and offer guidance to decision makers and stakeholders. School shooting studies in the United States disclose that not a single student or staff member was killed behind a locked interior door, affording evidence that door hardware and efficient lockdowns are still the most effective tool in preventing deaths during this epidemic of deadly school shootings.

“CLASSROOM” FUNCTION LOCKSET (b.1) This lockset is designed to be locked from the exterior, or hallway side of the door. Anyone in the room can always exit.

“INTRUDER” FUNCTION LOCKSET (b.2) This lockset is designed to be locked from both the inside and hallway side of the door. Anyone in the room can always exit.

(b.3) This lockset is designed to be deadbolted instantly by pressing the red button on the door. Anyone in the room can always exit.

RELYING ON 1 PERSON TO LOCKDOWN THE DOOR

What if the teacher is not in the room? Relying on battery operated key fob? Where are the keys located? How long will it take to locate? Under high stress, can the keys be inserted quickly?

Created to allow anyone, anytime the ability to secure the door. No need to rely on the teacher, credential holder, to be present. No searching for keys or scrambling to lock to the door. Equipped with a code-compliant emergency deadbolt

• The person nearest the door can press the red button on the door to secure the classroom instantly. • The red button projects a 1in stainless steel emergency deadbolt. • Secure confidently with a large visual indicator.

FIRE & LIFE-SAFETY CODE-COMPLIANCE • Can you exit with one motion, with no special knowledge? • Will First Responders & Admin have issues gaining entry whether it’s an unruly student or emergency situation? • Is it fire-rated and ADA compliant? • Can the barricade device be misplaced or stolen?

First Responders & teachers can enter by key, no delayed entry. Occupants can exit by pulling the lever down, no one is trapped. Fire-rated & ADA compliant Red Button Locks are always on the door, no misplacement.

Scan this code or contact us for more information: www.RedButtonLocks.com 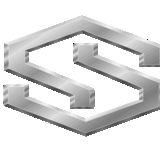 Red Button Intruder Locks allow anyone in the room to quickly barricade the door in a lockdown, while retaining single motion egress and cod...

Red Button Intruder Locks allow anyone in the room to quickly barricade the door in a lockdown, while retaining single motion egress and cod...