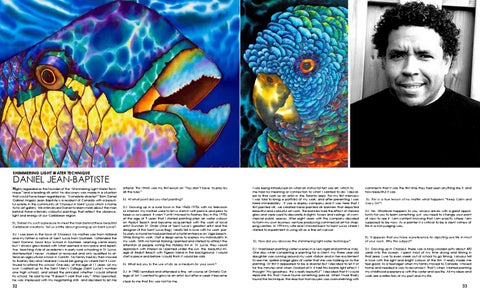 nique” and a leading silk artist, his discovery was made in a situation that could have been regarded as “complete disaster!” Born Daniel Gabriel Angelo Jean-Baptiste is a resident of Canada with a beautiful estate in the community of Choiseul in Saint Lucia which is home to his art gallery. We interviewed Daniel to learn more about the man behind these intensely colourful paintings that reflect the vibrance, light and energy of our Caribbean region. SL: Daniel it is such a pleasure to meet the man behind these beautiful Caribbean creations. Tell us a little about growing up on Saint Lucia?: DJ: I was born in the town of Choiseul. My mother was from Holland and my father a native of Saint Lucia from Soufriere. I attended the Saint Dominic Savio Boys School in Soufriere. Learning came easily but I always grew bored with what seemed a slow pace and repetitive teaching style of academics in early rural schooling in St. Lucia, disinterested I never studied or reviewed and only qualified to attend an agricultural school in Corinth. My family had by then moved to Rodney Bay and I realized I would be going no where fast if I continued to attend this school. One day, at the age of 11 years, on my own I walked up to the Saint Mary’s College (Saint Lucia’s number one high school), and asked the principal whether I could attend his school. He said to me “It doesn’t work that way”. After I persisted, he was impressed with my negotiating skills and decided to let me

attend. This I think was my first lesson on “You don’t have to play by all the rules” SL: At what point did you start painting? DJ: Growing up in a rural town in the 1960s-1970s with no television or Internet, my mother used to let us sketch with pencils and pens to keep us occupied. It wasn’t until I moved to Rodney Bay in the 1970s at the age of 9 years that I started painting plien air water colours on Reduit Beach and became acquainted with the work of local artist Dunstan St. Omer (One of Saint Lucia’s greatest artist and the designer of the Saint Lucia flag). I really fell in love with his work, particularly a mural he had painted at a hotel entrance on Vigie beach. While liking his work, I felt a deep sense to express my individuality in my work. With no formal training I painted and started to attract the attention of people visiting the Holiday Inn in St. Lucia, they would approach with interest as I painted under the sun, the beautiful image of Reduit Beach with Pigeon Island in the background. I would start a piece and before I could finish it would be sold. SL: What led you to the use of silk as a medium for your work? DJ: In 1980 I enrolled and attended a fine art course at Ontario College of Art. I wanted to grow as an artist, but after a week it became clear to me that this was not for me.

I was being introduced on what an instructor felt was art, which to me had no meaning or connection to what I wanted to do. I decided to find work as an artist in the Toronto area. For my first interview I was told to bring a portfolio of my work, and after presenting I was hired immediately . It was a display company and it was here that I first painted silk, we created hand painted silk banners that depicted beautiful and colourful art work. The banners had the effect of stained glass and were used to decorate skylights, foyers and ceilings of commercial public spaces. After eight years with the company decided to form my own business venture producing commercial art for shopping centers. In 1994 my wife and I moved back to Saint Lucia where I started to experiment in using silk as a fine art canvas. SL: How did you discover the shimmering light water technique? DJ: I had been painting water scenes in a very rigid and primitive style. One day while completing a painting for a client, my three year old daughter was running around my work station and in her excitement to see me, spilled a large glass of water that she was holding on to the painting. At first it appeared to be a disaster but I decided to let it sit for five minutes and when I looked at it, it had this bizarre light effect. I thought “my goodness, this is really beautiful”. I decided that if I could replicate this that I have found something special. When I had finally found the technique, the reaction from buyers was overwhelming with

comments that it was the first time they had seen anything like it, and how beautiful it was. SL: This is a true lesson of no matter what happens “Keep Calm and Carry On”! DJ: Yes. Whatever happens to you, always arrives with a great opportunity for you to learn something, just, you need to change your point of view to see it. I am content knowing that I am exactly where I am supposed to be now. As a painter it is critical to be a silent witness of life in a non-judging way. SL: It appears that you have a preference for dipicting sea life in most of your work. Why this subject? DJ: Growing up in Choiseul, there was a long wooden jetty about 400 yards into the ocean. I spent most of my time diving and fishing in that area. I use to even sneek out of school to go fishing. I always fell in love with the light and bright colours of the fish, it really made me feel good. As a teenager when my family moved to Canada, I missed home and needed a way to reconnect. That’s when I started painting my childhood experience with the water and sea life. All my ideas and work are a reflection of my past and my life.

Seashell Lifestyle magazine published in Saint Lucia, is a publication featuring the island and other luxury stories. This is our fall/winter issue 2013. Have a great read! 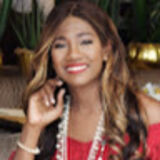